Iceberg Lake is a body of water in the Land of Ooo notable for its icebergs. Within many of the icebergs is debris, possibly from a pre-war civilization, as well as living creatures, such as the Business Men.

The lake initially appears in "Business Time" as the location where Finn and Jake decide to build a Gauntlet dock. While melting icebergs to get the scrap inside to use for their dock, they come across an iceberg full of Business Men, who help them finish the dock. Finn later hires them to refreeze themselves in an iceberg and go back into the lake.

The lake also reappears in "Mortal Folly," where it is revealed to be between the Candy Kingdom and The Lich's lair. As The Lich heads to his Well of Power, Finn and Jake are forced to cross it to stop him, all while being pursued by the Ice King, who has captured Princess Bubblegum. 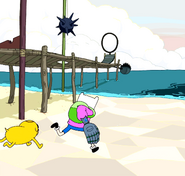 The gauntlet dock in "Mortal Folly"

The gauntlet dock in "Business Time"

Add a photo to this gallery
Retrieved from "https://adventuretime.fandom.com/wiki/Iceberg_Lake?oldid=599073"
Community content is available under CC-BY-SA unless otherwise noted.