Generate and manipulate ice and cold

Animated short
Ice Magic (also known as Cryokinesis or Ice powers) is a rare and strong elemental power that enables the user to generate and manipulate cold and ice. This ability is most notably possessed by Ice Elementals. The Ice King's crown can also bestow the wearer ice-powers.

Cryokinesis can be used for various effects. Most commonly, it is used to freeze objects or beings in blocks of ice. Living beings encapsulated in ice are totally immobilized and this freezing stops all life functions.[1]

It can also be used to manipulate ice and snow, animating these substances according to the user's will. Experienced users can even form golems out of ice and snow.

Users can create or summon blizzards and hailstorms. They can also generate freezing winds or blow cold air.

Fridjitzu is a mystical ninja art that promotes the use of ice and snow attacks. By performing certain hand movements and incantions, the user is able to manifest the desired icy technique. Such techniques are held in the Ice Ninja manual Ninjas of the Ice: The Art of Fridjitzu and allow the user to execute more refined attacks, and even create weapons out of ice. 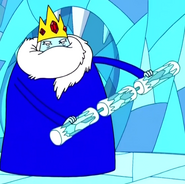 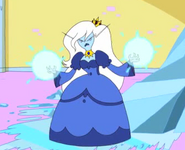