Ice King
Gunter
Snow Golems
Iceclops
Polar Bears
Roger
The Ice Kingdom is a setting in Adventure Time. It comprises of many pointy, snow-capped mountains, as well as several snowy hills. It is the location of the Ice King's castle as well as home to a variety of ice-themed creatures. This is where the animated short takes place and is also the place that the princesses are held captive in "Prisoners of Love." The Ice Kingdom's population is fairly sparse, especially compared to other kingdoms in Ooo. The population consists mostly of penguins, with the occasional elemental creatures conjured by the Ice King himself. The Ice Kingdom is bordered on at least one side by water, as shown in "Evicted!," and is visible from Finn and Jake's Tree Fort. The entire kingdom is destroyed in "Frost & Fire" by Flame Princess, but subsequently rebuilt by Gunter, and the Ice King moved back to his kingdom in "Play Date." 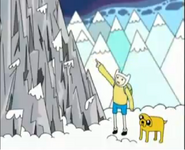 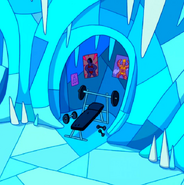 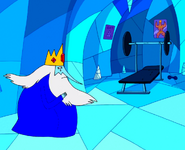