A flashback reveals a ruined city in the aftermath of the Mushroom War, and a young Marceline standing alone in the wreckage crying. A not-yet-fully transformed Simon runs to her to wipe her tears away and goes to a toy store to give her a stuffed animal that appears to be Hambo, which cheers her up. 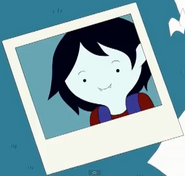 Retrieved from "https://adventuretime.fandom.com/wiki/I_Remember_You?oldid=351883"
Community content is available under CC-BY-SA unless otherwise noted.