I Am a Sword

"I Am a Sword" is the fifth episode in the eighth season of Adventure Time. It is the two hundred and thirtieth episode overall.[2]

Finn starts having nightmares about his missing Finn Sword, he wonders if they are actually real.[3]

Finn and Jake try to find a bandit while travelling on a bridge. Finn then tries to impress Jake by performing sword tricks. He suddenly falls and drops the sword down the trench. They search the trench. With no success, they return to the Tree Fort. During the night, Finn has a dream of being a girl thief and robbing a man in the woods.

When he wakes up screaming, he runs downstairs to find Jake and tell him about his dream. Jake tells him that it was probably "just a guilt dream." He then pulls out a sword he made to look like the Finn Sword. Moments later, Science Cat and Spear Bear call on him for the daily brawl. Finn tries to fight them with the new sword but it breaks instantly. Regardless, he beats them by knocking them out with the broken remnants of the sword. After they leave it is night and Finn decides to stay up to avoid having the same guilt dream. Jake tells him that he will stay up with him but instantly falls fast asleep. Finn proceeds to play a video game on BMO. While still awake, Finn has the same dream of the girl thief and concludes that the Finn Sword is in trouble and sending him a telepathic message. He awakens Jake and they travel to the Spiky Village.

Meanwhile, Bandit Princess (the girl thief) attacks a Spiky Village Bank security guard using the Finn Sword. Finn and Jake arrive when suddenly a building explodes. Spiky people flee in terror when Bandit Princess appears holding a loot bag and the Finn Sword. While escaping, she comes face to face with the Spiky Mayor. He offers her a deal in order for her to stop stealing from them but she refuses and cuts his head off. After running away, the Finn Sword asks her why she is a thief and she explains that she was born with rabies and her parents did not care for her which lead her to do bad deeds. She then throws the Spiky Mayor's head far away. Finn Sword sends another distress signal. Sharon explains what happened to Finn and Jake. Then, Spiky Mayor's body uses body language to tell them to follow him to find his head. Upon retrieving his head, Spiky Mayor tells them to follow Bandit Princess to the Box Kingdom.

Once they arrive, she attacks Finn with his own sword. To save him, Finn's Grass Sword sprouts from the grass thorn in the palm of his hand and he accidentally stabs the crystal part of the Finn Sword and breaks it. Bandit Princess escapes and Jake carries a knocked-out Finn home. He then hangs the now broken Finn Sword above the fireplace and BMO places a sticker of Finn's face onto the crystal part of the sword. When they leave the room, it glows bright green. 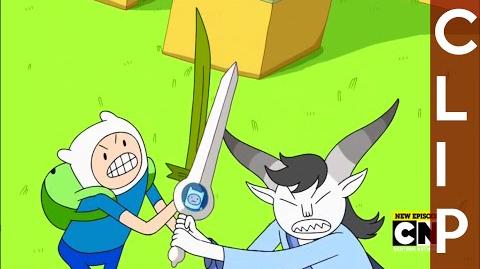 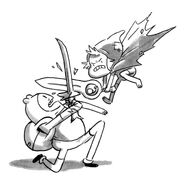 I Am Sword storyboard panel

Spiky Village (I am a Sword) 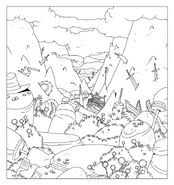 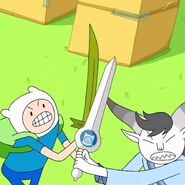 Finn Sword Glowing Green
Add a photo to this gallery

Retrieved from "https://adventuretime.fandom.com/wiki/I_Am_a_Sword?oldid=823416"
Community content is available under CC-BY-SA unless otherwise noted.