View source
watch 01:52
The Humans in the Land of Ooo
Do you like this video?
Play Sound

Animated short
Humans are a critically endangered species in the Land of Ooo. It is hinted that they were driven to near-extinction roughly a thousand years before the events of Adventure Time, with Finn currently being the few of his kind throughout Ooo. There are other humans though, as discovered in the Islands mini-series.

Over a thousand years before the main events of Adventure Time, human society was in full bloom, with the existence of advanced technology and large, highly-populated cities. This all changed however, with the beginning of a conflict known as the Mushroom War. Near the end of the war, the Mushroom Bomb was dropped, releasing its mutagenic properties and the spirit of the Lich to the land. This had catastrophic consequences, and it led to the near-extinction of the human race. The humans directly affected by the bomb were either instantly killed or heavily mutated. These mutants, along with vampires and Rainicorns, posed a threat to the surviving humans. So, tribes of survivors began departing the continent of Ooo. One of these tribes was led by Two Bread Tom on a patched-up pre-war ship. These survivors sailed until they arrived at a set of islands southwest of Ooo, and founded new human colonies and isolated themselves by building a robotic Guardian to keep any human from leaving or any danger from entering prior to events of Islands miniseries.

A few survivors of the bomb's blast (Marceline, Moe, Patience St. Pim, and Simon Petrikov) went on to live for the next 1000 years in the ruined land.

In the current timeframe of Adventure Time, most human-made structures and artifacts from before the Mushroom War are now in ruins, and Finn is the only human living in Ooo, though some former humans affected by the mushroom bomb exist in the form of Oozers and the Business Men.

Many residents of Ooo are under the impression that humans no longer exist, as demonstrated by Bob and Ethel Rainicorn in "Her Parents". Although there are several other beings that resemble humans in the Land of Ooo, most of these beings are not recognized by other characters to be humans, and they seem to be recognized as humanoids or mutants.

Finn eventually meets Susan Strong and the Hyooman tribe, believing them to be other human survivors just like him. However, the hyoomans end up actually being human/fish mutants, but Susan is later revealed to be a true unmutated human, albeit with a cybernetic implant on her head, in "Dark Purple".

In "Holly Jolly Secrets Part II", Finn discovers that Ice King's past as a human, when he was named Simon Petrikov.

Finn was the only confirmed human in Ooo until the episode "Betty," when Simon accidentally brings Betty Grof into the future. Betty later becomes a wizard by gaining Magic Man's powers in "You Forgot Your Floaties".

In "Billy's Bucket List," it's revealed by Billy that Finn's human father, is alive. After being freed from the Crystal Citadel, Martin travels away from Earth and later takes the Purple Comet's offer to ascend into another plane of existence.

In "Preboot," Finn and Susan meet Dr. Gross, a human-robot hybrid. Dr. Gross mentioned the existence of more humans. The matter of Susan's implant comes to a head, leading to a fight where she speaks in a robotic-sounding voice and attempts to take Finn to the edge of the ocean, claiming he is her "objective." While in this state, she is able to absorb the blast from a Gumball Guardian and make herself larger. At the end of the episode, Finn destroys the cybernetic implant and Susan returns to her former self, but not before a message is sent to the human islands.

In Adventure Time Mini-Series: "Islands" it revealed that around thousand years prior to the main events of the series, a group of human survivors of the Mushroom War fled Ooo on a container ship (as seen in Stakes) to escape from the vampires, oozers, and other magical and mutated dangers. They eventually settled on a secluded island chain far from the mainland. Over the next thousand years, their community thrived and developed into an advanced technological society. While it was a veritable utopia, there were those few who occasionally grew dissatisfied with their rigidly structured lives and attempted to flee the island; these "hiders" were in turn hunted down and returned by specially trained "seekers". In addition to the seekers the island founders also built a giant robotic guardian to prevent anyone from leaving or entering the islands.

Years before Finn's ocean voyage, Dr. Gross accidentally released a virus that slowly began to destroy humans on Hub Island. In a desperate attempt to save humanity again, a Helper named Minerva Campbell became an artificial intelligence that commanded hundreds of robotic bodies that aided the surviving humans on Founders Island ever since until Finn, Susan, Jake, and BMO found the remaining human population and convinced them that the outside world is not all dangerous. Even though the only human who ended up leaving the islands was Susan's old friend Frieda, the humans now have the freedom to leave the islands and the guardian was deactivated.

In the final episode of series "Come Along With Me", both Ice King and Betty returned to their original forms while inside GOLB's body. Betty sacrifices herself by permanently wishing the Ice King back into Simon, and merging herself with GOLB. And the last flashback reveals the Island's humans finally returned to Ooo for the first time in centuries, rebuilding back their former society before the Mushroom War.

Humans from the Farmworld timeline 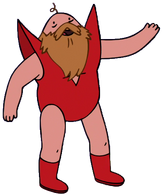 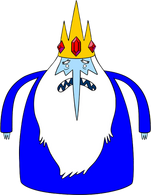 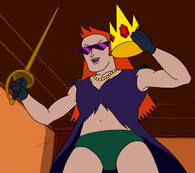 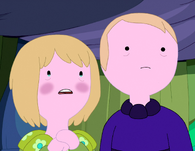 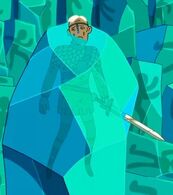 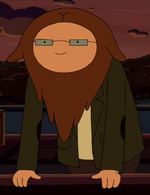 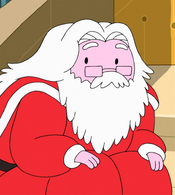