"Together Again" (Distant Lands)
The House People are characters that appear in the episode "Donny." They are first seen in a cluster and not moving, which makes Finn think that they are a deserted miniature town. As Finn approaches they reveal that they are actually box-shaped people who wear tiny houses like clothing or a shell. Their natural predators are the Why-Wolves, and they are constantly harassed by Donny, a grass ogre. They are also called "Housies." 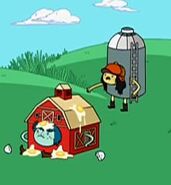 Bank without his outer shell

Bank being attacked by a Why-Wolf 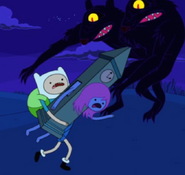 Finn using a House Person to attack a Why-Wolf