Seo Kim[2]
Somvilay Xayaphone[2]
"Horse and Ball" is the eighteenth episode in the eighth season of Adventure Time. It is the two hundred and forty-third episode overall.[1]

When disaster befalls James Baxter, it's up to Finn and Jake to help him pick up the pieces.[1]

The ever-cheerful James Baxter makes a visit to a somber mole people gathering one morning, cheering up an elderly mole person before his impending death as well as his grieving children. Excited, Finn, Jake and BMO run out of the Tree Fort to see James, too. The elderly mole person thanks James Baxter for letting him go a happy man, before exploding. To everyone's horror, James' beach ball is impacted by the explosion, and becomes torn. The mole children start weeping again as they collect their elder's parts.

James looks unsettled as he registers what has just happened. Jake quickly transforms into a ball so James can ride him, but the horse is paralyzed in shock and is unable to continue with his act. Jake tells Finn that as an artist, James requires the proper equipment to work, and sets out with BMO to find him a patch for the beach ball. Finn stays behind to watch over James, and hopefully cheer him up.

Finn helps him into the treehouse, apologizing nervously for how cold it is before giving him a blanket. When Finn sees how soiled James' hooves are, he quickly goes to retrieve a washcloth and some herbal tea. At the kitchen, Finn expresses his anxiety to Shelby over James Baxter being in his house, and not knowing how to act around an artist so sophisticated. Shelby advises him to treat James like a normal guy, as that is what anyone would want, even a great artist. However, Finn is still unable to speak to the horse normally as he helps him wash up.

Jake and BMO arrive at the Rag-and-Bone Kingdom, where they meet Raggedy Princess. She tells them that instead of a patch for the torn beach ball, they could probably find a whole new beach ball somewhere in the trash piles if they poked around enough, and provides them with a poking stick each. As they run off, she peels away an old poster on the ground behind her, revealing a pristine undamaged beach ball buried underneath, and then hides it again.

Back at the Tree Fort, Finn is still awkward around James, who remains rather vacant and inscrutable. James Baxter has a flashback to his past, when he had been standing by a river with his life savings in a bag, contemplating his stifling urban life thus far. Disenchanted by the city, he kicks his money down the river. As he watches it float away, he catches sight of a cave nearby. Upon entering, he sees piles and piles of children's toys, among them a shiny, red-blue-and-yellow beach ball. A sobbing bat attaches itself to James' head, and James successfully cheers it up by balancing himself on the beach ball and rolling around. He scans the cave, sees a box labelled 'GAMES' and a sign reading 'Bookstore', and mispronounces both as 'James' and 'Baxter' respectively. From then on, he neighs 'James Baxter!' as he travels on his beach ball. The flashback ends, and James is murmuring the words with his eyes closed.

Jake and BMO are unable to find a new beach ball at the Rag-and-Bone Kingdom after extensive searching. They peel away a piece of paper from the ground when they see a round protrusion beneath it, but it is only Raggedy Princess rolled into a ball. She tells them that since they are still around, she might as well recite her poems for them. BMO starts crying mid-way into the poetry recitation, saying it is too sad. He is reminded of James as Raggedy Princess is like his exact opposite, but since losing his artist tool, James can never make anyone happy again. Raggedy Princess realizes she has been a "creative blockhead," and swiftly goes behind a trash pile to release a torrent of beach balls for Jake and BMO.

In a second flashback, we learn that the bat James had befriended was abandoned by him when James started to perform for more and more people. James is busy entertaining a large group of bears when the bat flies away in tears, leaving the forest forever without a goodbye from its only friend. The flashback ends, and we are back in the treehouse.

Finn is urged by Shelby to give James some real talk. As James is half-conscious, Finn tells him that he is a genuine, one-of-a-kind horse, and that he makes so many people happy just by being himself. He encourages James to let go of what is lost, as it is about time he makes himself happy. James wakes up, just as Jake and BMO reach home. They excitedly give James twelve new beach balls, and wait to see if he perks up. However, James takes a look at a beach ball, shakes his head, and leaves the treehouse in silence. Finn, Jake and BMO are devastated.

A moment later, they hear music playing outside and the sound of James' "James Baxter!" They look out the window to see James dancing on his own in the sunset, a wide smile on his face. For the first time, James is alone as he performs. Jake wonders out loud who James is dancing for, and Finn replies, "I think he's doing it for himself." 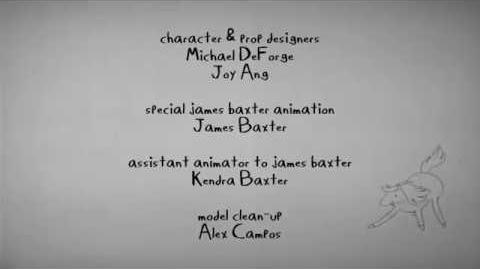 Retrieved from "https://adventuretime.fandom.com/wiki/Horse_and_Ball?oldid=851574"
Community content is available under CC-BY-SA unless otherwise noted.