Kent Osborne
Andy Ristaino[2]
"Hoots" is the thirty-sixth episode in the sixth season of Adventure Time. It's the one hundred and ninety-second episode overall.[3]

A charismatic stranger in Finn's dream leads Cosmic Owl to shirk his duties.[4]

The episode opens with the Cosmic Owl holding groceries flying down towards a motel he is staying at. He enters and exclaims "I'm home!" even though the room is empty. He proceeds to put his groceries away, prepare a meal and shuffles though his room to open a closet full of board games. A large pink jewel in his room blinks and emits a sound, then spits out a golden dream token. He says "Sorry fellas, I gotta go make some dreams come true" to his stack of board games.

Cosmic owl takes the coin and opens up a map that allows him to see all the dreams of everyone in the universe. He swipes right and lands on Finn's dream where he is being surrounded and hugged by Sweet P and Martin, claiming "Ah, Finn again." Using the coin to gain access, he enters the dream to find Finn, Sweet P and Martin posing for pictures being taken by Jake. Upon closer inspection, Cosmic Owl sees that Jake's face is upside down and Sweet P is facing backwards. The dream then shifts as Sweet P floats up and Martin walks away from Finn. A lady bird enters though a door carrying a ladder and takes a disco ball that was suspended above Finn. Cosmic Owl becomes intrigued and reveals his presence, but only Finn notices him. Finn asks him questions but Cosmic Owl isn't paying him any attention, and forcefully hoots to wake Finn.

Jake and Shelby are surprised as Finn wakes up and BMO pulls Shelby out of Finn's stomach using a fishing rod. Jake pleads with Finn to fall asleep again so they can continue stomach fishing. Finn goes back to sleep to see Cosmic Owl retreat to his room, and finds a bear with a grandfather clock for an arm sitting across from him.

Cosmic Owl is at Prismo's place drawing the lady bird in his sketch-book and ignoring Prismo. Prismo seems excited for Cosmic Owl falling in love until he reveals that he saw the lady bird in Finn's dream. He thinks it is an abuse of his powers. Cosmic Owl claims he doesn't care and wants to let love lead him. Prismo relaxes as he realizes that finding one person in billions of dreams is nearly impossible. Cosmic Owl flies away determined to find her again.

Back in his room, Cosmic Owl prepares coffee and music as he searches the dreams of residents of Ooo including Peppermint Butler, Tree Trunks, Marceline, Turtle Princess, Lemon Hope, Abracadaniel and others, all the while ignoring the large pink jewel that spawns dream tokens. He finally finds the lady bird in a dream full of butlers and maids serving small meat hors d'oeuvres. He takes a token but hesitates to enter, although he enters anyway.

He talks to her, gives her a shrimp puff and tells her that he saw her in a dream and wanted to see her again, though he also lets her know that he shouldn't have done so. As he says this, a waiter carrying a tray of hors d'oeuvres slips and falls with the tray landing on him as other waiters and maids laugh. She inquires as to who's dream she was seen in. He answers that it was in Finn's dream, and she becomes more interested in him, She touches him, but in doing so wakes up. They both want to see each other again, so Cosmic Owl bookmarks her dream coordinates so that he can find her again the next night. She eats the shrimp puff and hands him the toothpick to keep.

Prismo is telling Cosmic Owl a story of his own personal relationships through the television, but is interrupted by the large pink jewel. He takes the token and finds the lady bird in a dream full of what appears to be small icebergs. She is upset that the dream is dull and empty, so Cosmic Owl takes her to his room. She is impressed and wants to know more about the dream map. He lets her spy on other's dreams, including Mr. Pig, Mr. Cupcake, Party Pat and Kim Kil Whan, then asks if it can see the dreams of royalty. He says yes, but claims that Ice King's dreams are "so sad." She mentions Princess Bubblegum and he brings a token to enter the dream. He is beginning to feel something off about the lady bird.

In the dream, PB waters a small part of land, and grows a huge tree fort in front of a crown of candy people. She is praised at first until the lady bird begins to glow a dark aura and the sky darkens. The candy people become angry and boo her. PB is taken aback while the lady bird's dark aura manifests into a tendrils to melt the candy people into a yellow base. The black aura then rushes to PB who is distraught at all her hard work gone to nothing, and is pushed into the yellow base where she sinks, then wakes up.

Cosmic Owl flies to the lady bird, touches her and she snaps back as the black aura disperses. He asks her "Do you have any idea what you've done?" as he flies her back to his room. Cosmic Owl freaks out that she interfered with a dream that he was in, as dreams he enter come true. She claims "It just felt like the right thing to do."

He tells her that it is impossible for them to be together and wakes her up, revealing the lady bird to be Gunter who was sleeping in a crib. Ice King offers Gunter a bottle as a penguin carrying a tray of sausages slips and falls with the tray landing on him like the dream Cosmic Owl entered where he found the lady bird. Gunter angrily takes the bottle and waddles outside the room about to throw the bottle but looks up at the sky instead. Gunter sits down and pushes the bottle down instead. 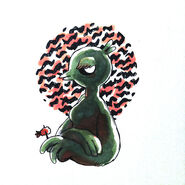