"Three Buckets"
Holo technology is prevalent in the series Adventure Time. It is technology that allows those in the Land of Ooo to view projected media.

There is a variety of objects and equipment that are built to generate a hologram: namely, hardware with push buttons, cartridge slots, and a port hole through which the light is designated to shine. The screens are see-through, and usually colored, with the most common color being green, followed by pink and red. Images displayed in holograms usually appear quite clear and detailed, with a stagnant color being the only hindrance. The game Card Wars involves small, detailed 3-D images projected from the game board in a wide range of colors.

A projector is a small object that is used to project rays of light, in this case hologram images. They operate by being plugged into another device for power, the port holes are either located in the middle of the device or are placed circular. In "Video Makers" it was used to display videos that have been recorded by BMO, who is can operate it by a connection of plugs. Another use is for Karaoke purposes as seen in "Belly of the Beast."

The holo-message player is used in the episode "Dad's Dungeon" to play Joshua's messages so that Finn and Jake can get to the end of his dungeon. Joshua recorded holographic tapes of himself so that he can tell Finn and Jake about his dungeon with the intention of making Finn stronger. The messages also explain to Finn that Jake's family sword is at the end of the dungeon. In one of the tapes, Joshua explains that he is trying to trap an Evil Monster in a pit, but the creature ends up grabbing him with two fingers and pulling him into the chamber. Jake remixed the last message Joshua recorded of himself at his house to play "Joshua's Final Message Remix" to motivate Finn while he is fighting the Evil Monster. The holo-message player is used most recently in "Jake the Dad" as a sort of parenting manual. Jake uses a cartridge made by his mother, Margaret, throughout the episode to aid him in parenting. The holo-message player's messages are recorded onto cartridges inserted into the front slot of the device.

The holographic newspaper is a futuristic newspaper first seen in "The Duke." The newspaper has news in it about happenings in the Land of Ooo. It is unknown how many of them there are, or how they are made and sold. It seems to be Ooo's version of reading the news on a computer. Jake writes an advice column in it called "Begs The Question." Similar objects like this are Ice King's computer and the holographic device that Finn dug up while looking for a video camera in "Video Makers" that projected the image of the PHIL FACE.

The holo-pendant is first shown in the episode "The Other Tarts." It is a pink gemstone necklace that displays a map of The Land of Ooo. It is also used to receive incoming transmissions. It projects a hologram that communicates with audio and video. Princess Bubblegum gave it to Finn so that she could communicate with him and check on the royal tarts while he and Jake traveled to the Back-Rubbing Ceremony. When Princess Bubblegum tries to contact Finn after he loses some of the tarts, he throws the holo-pendant away. The holo-pendant appears to be like a G.P.S. except it shows everything in pink.

The holo-pendant appears again in "The Great Bird Man." Princess Bubblegum uses it to communicate with Finn and Jake as they travel the Bad Lands searching for the mysterious "bird man."

The holo-pendant also appears again in "Red Starved" where Finn is trying to get help from Princess Bubblegum because they're trapped but the signal is poor because they are underground.

Finn and Jake use the holo-pendant to communicate with King of Ooo in "Mama Said" while on a mission to retrieve a floating mushroom.

In "Scamps" Finn's holo-pendant makes another appearance. Princess Bubblegum calls Finn during his camping trip with the Marshmallow Kids to ask how he is doing with the delinquents.

Its also seen in the first sequence of the Adventure Time theme song hanging on the right tree.

The game Card Wars is played with a board that projects detailed, moving, three-dimensional images onto and above its surface, in a wide range of colors. The holograms are affected by cards laid alongside the board, and seem to also respond to players' thoughts and/or voice commands.

In "My Two Favorite People," Finn and Lady Rainicorn receive some of these rings from a forest wizard for free. Each colorful ring projects its own tiny colored image. While the images look like holograms, they may be magic images, because the power rings can also produce fire and are cursed.

A screen from "Video Makers" 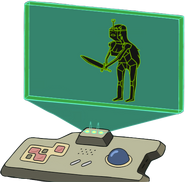 Princess Bubblegum using the holo-pendant to talk to Finn underwater