Somvilay Xayaphone
Kent Osborne
"Holly Jolly Secrets Part II" is the twentieth episode in the third season of Adventure Time. It is the seventy-second episode overall.

In the continuation of "Holly Jolly Secrets Part I," the Ice King pulls out all stops to prevent Finn and Jake from discovering his most shocking secret...

The scene opens up with Jake screaming (from the finale of the previous episode) but he was actually singing "Alouette." Jake is wearing a yarmulke and scarf. Then they decide to watch the Ice King's secret video, thinking that it might show his evil plans. The first video reveals that his life is stagnating, so he weeps, and BMO discovers a "code" in the pattern of his tears. Through a strange, random process, the code forms a picture of Gunter. The second video is of him recording the Wildberry Princess while in a cage in his palace. He was asking Wildberry how she felt about an event, and it turns out that Ice King was talking about why Gunter was standing in the corner (Gunter tried to eat the Ice King's socks).

In the Ice King's attempt to stop Finn and Jake from watching his secret tapes, he makes an army of snowmen. The Ice King breaks into the Tree Fort through the chimney. In the process, his blue robes become covered in soot, so he takes them off and covers himself with Finn and Jake's red tablecloth. Once inside, the Ice King lets the snowmen in through the front door. Finn and Jake rush to finish watching the videos and determine the Ice King's evil secrets. The snowmen attack, but they are easily defeated, and BMO begins to play the final tape.

The third tape reveals that a long time ago (prior to the Mushroom War), the Ice King was a human named Simon Petrikov, who had a fiancée named Betty. He was an antiquarian (a person who studies and collects ancient artifacts), and purchased a strange crown from a dock worker in Scandinavia. He took the crown home to show Betty, and when he put the crown on his head for a laugh, he started to see visions and hallucinations (references to his "Wizard Eyes"). He fought with them, shouted at them before realizing it was the crown sending the visions into his head. He quickly took it off after his realization, he had no recollection of his actions, but what transpired during that time eventually caused Betty to leave him (Simon noted, after taking off the crown, she was "Looking at me with such contempt.") As the video progresses, Simon begins to look more and more like the Ice King as we know him. His skin takes on a blue tint, his hair begins turning white, his nose starts to be pointy and a beard slowly appears on his face. He is increasingly distraught about the loss of Betty, his "princess," and his actions while under the influence of the crown. In the background of the video, we see an airplane flying over modern buildings, evidence of his life before the Mushroom War. We can also infer that the airplane was in fact a war plane, meaning that it was probably the beginning of the Mushroom War. Simon is aware that he is losing his mind, yet is unable to control it. In the end, he is accepting of his fate, and he begs for forgiveness for his actions to anyone who might come across his tapes.

When the video ends, it is revealed that the Ice King was not afraid of them finding out that he was once a human, rather, he was merely ashamed of having once worn glasses. This shows us he has completely lost and forgotten any trace of his human, past-self (also in the episode "I Remember You") yet his desire to have his beloved Betty back lives on in his obsession with capturing Princesses.

Finn and Jake feel "a fleeting moment of empathy for the biggest weirdo in Ooo," and from that time on they gather together once every year, wear Christmas sweaters, and watch videos. Shelby did the narrations on this ending scene. 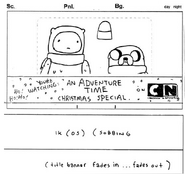 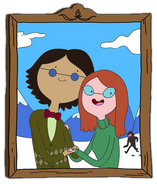 Retrieved from "https://adventuretime.fandom.com/wiki/Holly_Jolly_Secrets_Part_II?oldid=826162"
Community content is available under CC-BY-SA unless otherwise noted.