Somvilay Xayaphone
Kent Osborne
"Holly Jolly Secrets Part I" is the nineteenth episode in the third season of Adventure Time. It's the seventy-first episode overall.

In the first part of a holiday special, Finn and Jake try to decipher the hidden secrets of the Ice King's video diary.

Finn and Jake are trying to dig up a treasure Jake had found in the Dump and had buried without opening. When they get to the treasure Finn recognizes it, saying that he saw Ice King with it and burying it in a pile of boogers in the Dump. So they see that inside the suitcase is a bunch of tapes belonging to the Ice King and make plans for a secret tape watching.

Jake puts up flyers to warn people that the tape watch is for Finn, Jake, and BMO only but the Ice King, while trying the William Tell trick on Gunter, sees one and goes over to the Tree Fort. At that very location Finn and Jake start to watch the tapes and see that they are video journals and get bored soon. After some snack making Finn and Jake think there might be a secret code hidden in the message.

To crack the code Finn and Jake call up Princess Bubblegum, who is the 'smartest person' they know, but the line is interrupted by the Ice King who wants to watch the tapes too. BMO sees Ice King from a window and warns Finn and Jake who hang up on the Ice King. After caught up, he summons huge snow drifts that completely cover the Grass Lands as Jake starts to scream. 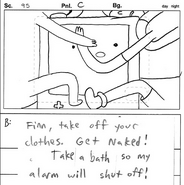