"Hitman" is the fourth episode in the third season of Adventure Time. It's the fifty-sixth episode overall.

The grounded Ice King hires a fire-manipulating hitman to hit Finn and Jake, without realizing the potentially deadly consequences.

The story opens with the Breakfast Kingdom, where Breakfast Princess and Toast Princess are eating breakfast. Suddenly, Ice King comes and tries to put honey on their waffles. They call Finn and Jake to save them, who grounds Ice King for four weeks. Back at the Ice Kingdom, Ice King is angry at the two, so he goes online and hires a hitman named Scorcher, who he believes will literally hit Finn and Jake. Instead, Scorcher sets Finn and Jake's Tree Fort on fire while they are making sandwiches with meat from their friend, Meat Man. Ice King then bursts in and puts out the fire but ruins the duo's sandwiches. After being scolded by Finn, Ice King flees back to his castle where he reveals to Scorcher that he did not want him to kill Finn and that he put out the fire. Later that night, Scorcher goes to Finn and Jake's bedroom and turns into smoke that fills the bedroom, possibly attempting to kill them by suffocation. Ice King then uses his Ice Powers to blow the smoke away.

Back in the Ice Kingdom, Ice King unsuccessfully tries to bribe Scorcher with money, a singing deer head, and a pair of night vision x-ray goggles to stop killing Finn and Jake. He also tries to get Scorcher to change his target to Lumpy Space Princess or Ghost Princess because they are his least favorite princesses, but fails. Finally, he hires Blastronaut, a hitman-hitman (a hitman who hits other hitmen), to take out Scorcher, but Scorcher easily defeats him. Ice King is then able to distract Scorcher by saying, "someone got hit in the boingloings," and freezes him, then runs to the Tree Fort.

Finn and Jake have just woken up and Jake decides not to eat anymore of Meat Man's meat because he is having dreams about him. Ice King comes and reveals that he had hired a hitman to kill them. Then Scorcher comes to finish off Finn and Jake. As they run from him, Ice King puts an ice dome over them and reveals a plan to trick Scorcher by freezing Finn and Jake and lowering their body temperatures to make him think they're dead. The duo is against this but Ice King does it anyway and the plan works. After Scorcher leaves, there is a note in cursive left that says, "Echos [sic] of past events nudge the tiller on my present course, I await it's [sic] reflection in the future" and it has a signature that appears to start with an "S," presumably Scorcher. After that, the Ice King climbs on top of Finn and Jake and mocks them by saying they're grounded under his butt.

Echos of past events
nudge the tiller on
my present course
I await it's [sic] reflection
in the future
Scorcher*
*Note: This is illegible, but presumed to be his signature

I had a dream about Meatman...

Scorcher: front and back 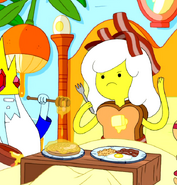 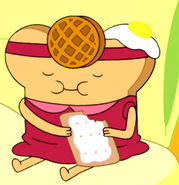 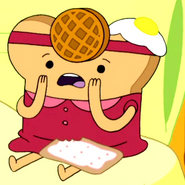 Ice King at his computer

"Look, a supermodel! Look, a hoverboard! Look, the apocalypse! Someone got hit in the boingloings"