Finn and Jake discover Billy, the greatest hero who ever lived, and try to help other people without using violence in their methods.

Finn and Jake are fighting a Swamp Giant, who has captured the Mini Queen. After falling down a long cliff, they beat up the Swamp Giant and save Mini Queen. As they were walking home, they find the sword of the greatest warrior that ever lived, Billy. After a series of flashbacks about Billy's greatest achievements, they try to remove the sword, which opens up Billy's cave. They walk in to find a much older Billy. When the heroes ask Billy to make him be their apprentices and fight monsters better, Billy says fighting monsters is a waste of time as they will always come back, so he tells Jake and Finn to help people without being violent. Finn and Jake take Billy's advice, and leave.

While they are walking, they run into a cobbler being chased by a dragon. The cobbler asks for help, but Finn and Jake tell they can only help if he has a non-violent problem. The cobbler says he is hungry, so they leave to go to make food for poor people. When they reach a town, they feed the townspeople free gruel, but Finn put too many stone-skin potions in the gruel thinking that it would help them become more tough, and the townspeople grow stone armor. The heroes decide to go take the cobbler's place while he goes to the dermatologist, and a woman going to a funeral asks for Finn and Jake to fix her shoe. They do, but the shoe becomes a weapon when Finn puts a magic nail in it. They later decide to be doctors, and do plastic surgery on Lumpy Space Princess so she can fit in her new swimsuit. The operation is successful, but Finn uses another magic nail and turns Lumpy Space Princess into a cyborg.

The heroes realize they suck at being non-violent, and believe to never be helpful. But the Swamp Giant makes a return when he tries to grind up an old lady, so Finn finally gives in and beats up the Swamp Giant and saves the old lady. Though they save her, Finn feels guilty as he betrayed Billy. The old lady makes him feel better by saying that he can help people with violence, because that was what he was born to do. They go back to Billy's cave, and tell him he was wrong, and they can help people by being violent. This fixes a hole in Billy's stomach, as his heart is repaired, and that Finn and Jake are his heroes. Billy kicks Finn and Jake out of his cave, and they run off laughing happily as Billy's old spirit returns.

The lyrics of Billy's Song mention things Finn does later on in the series:

Cotton Candy Princess giving Billy a piece of her hair 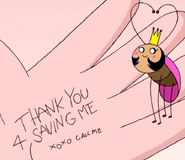 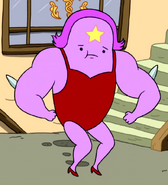 LSP shooting Cobbler with her laser

Finn as a doctor and Jake as a nurse 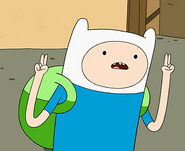 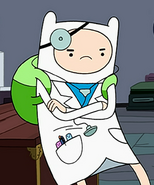