Pendleton Ward[2]
Sam Alden[2]
"High Strangeness" is the seventeenth episode in the eighth season of Adventure Time. It's the two hundred and forty-second episode overall.[1]

An otherworldly encounter puts Tree Trunks on the trail of a conspiracy in the Candy Kingdom.[1]

On a starry night, an unidentified flying object (UFO) can be seen rotating in the sky, high above Tree Trunks' and Mr. Pig's house. In the house, everyone is sound asleep. Mr. Pig briefly rouses from Tree Trunks' loud snoring and goes back to sleep. A moment later, a large glowing screen of blue light appears at Tree Trunks' bedside. A creature that is visibly extraterrestrial emerges from the light and soundlessly wakes Tree Trunks up. She expresses delight upon seeing the alien, who takes her into the light with him.

When they arrive at the other side, more aliens can be seen moving about in a peach-colored universe that has mushrooms growing around it. The aliens embrace Tree Trunks, who seems to know them all. A curtain is drawn to reveal five alien-elephant hybrid children and a leotard-clad grasshopper creature behind it, whom Tree Trunks refers to as her babies. Her voice comes out deeper and in slow-motion in this universe.

Back in Ooo, Mr. Pig awakens again to find his wife missing from bed, and pads around the house in search of her. He hears Tree Trunks saying goodbye to someone back in their bedroom, and returns to ask where she had gone, to which she honestly tells him she was visited by aliens who brought her to see her hybrid children. Mr. Pig simply laughs, probably thinking she had been dreaming. They discuss going to Princess Bubblegum's fireworks show the following day, which Tree Trunks initially refuses to go due to her distaste for the Princess, but eventually agrees to accompany Mr. Pig.

At the fireworks show the next day, Princess Bubblegum plays a short piece of electronic music (ending in "Science rules!") for the crowd, before bringing their attention to some graphs and equations on her chalkboard. She whispers, "I'm doing the right thing," though she appears uncertain, and proceeds to set off a rocket that resembles her countenance into the sky.

Tree Trunks does not let the matter rest, going out on the Candy Kingdom streets to protest against the Princess and her "secret space war." Most of the candy people think she is just another lunatic, but Starchy invites her to join his conspiracy team, the Veritas Brigade. She is eager to fight against Princess Bubblegum and agrees to join them, spearheading an infiltration into the Princess' space program facility that very night.

When Tree Trunks breaks into the facility with the help of the Brigade, she is shocked by the number of Princess Bubblegum-like rockets inside, all of them much bigger than the first one that was launched. Tree Trunks is certain the Princess is planning a full-scale galactic invasion and starts trying to dismantle the rockets. Upon opening one of the rockets, she sees a flurry of candy matter inside it and gets ready to extinguish them. Just then, a livid Princess Bubblegum and her Banana Guards burst in and stop her. Before she can be captured, Tree Trunks is abducted right before their very eyes.

At dawn, Princess Bubblegum and Tree Trunks wake up in the middle of a rural grassland. Princess Bubblegum is still dumbfounded by the experience. On their way back to the Candy Kingdom, the Princess apologizes to Tree Trunks for what she did to the aliens, as she never meant to hurt anyone with her space program. It had meant to be a way to seed new Candy Kingdoms on uninhabited planets, in case Ooo is one day destroyed. Tree Trunks looks up at the UFO in the distant sky for a moment and decides to help the Princess find a space for her program. Though the two of them will never be friends, Tree Trunks respects her as a mother and as a fellow believer of the infinite promise of the cosmos above.

That night, Tree Trunks is visited by an alien again. He speaks this time, apparently having learnt English from the Internet, and tells Tree Trunks that his people will fly Princess Bubblegum's rocket to their old uninhabited planet so they can have space to build their new kingdom. However, as the galaxy is so far away, he will not be able to see Tree Trunks again for another 40 years. When Mr. Pig wakes up beside her and demands to know who the alien is, Tree Trunks finally introduces her two husbands. 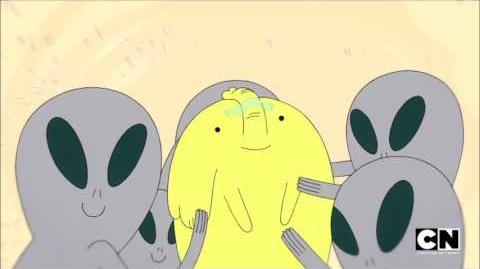