Hanna K. Nyström[2]
Aleks Sennwald[2]
"Hide and Seek" is the fifth part of the Adventure Time miniseries Islands and the twenty-fourth episode in the eighth season of Adventure Time. It is the two hundred and forty-ninth episode overall.[1]

While exploring some futuristic ruins, Susan sees glimpses of a familiar girl.[1]

The episode begins with Susan Strong standing in some futuristic ruins on an island, staring outside a window at two wolves fighting. Suddenly, she has a flashback of when she used to live there. There is a small girl with a hat with large blue ears looking through the window. The small girl tries to get a young Susan's attention. It is revealed that Susan is sitting in a futuristic classroom filled with other humans being tutored by Dr. Gross. Dr. Gross reveals that Susan's real name is Kara.

Dr. Gross says that the island they are on right now used to be a barren desert island, but humans intervened. Dr. Gross starts singing "The Founder's Song," which is all about humans surviving after The Mushroom War. She sings that a group of humans called "The Founders" constructed a plan to go to the islands to be safe from all of the mutants everywhere else. Some humans didn't like these ideas and tried to escape, being known as Hiders, so the founders decided to train people up to be Seekers and catch the Hiders. They also built a robot guardian to stop Hiders from leaving.

It is revealed that Susan Seeker in training and her and all of her classmates get an electronic boost through their implants, which makes them slightly more buff. Susan then sits with the girl who was trying to get her attention before,"Frieda"for lunch. Susan says being a Seeker is great, but Frieda, who is learning to be an Educator, does not completely agree with The Founder's Plan.

The episode then cuts to the present and shows Finn, Jake and BMO riding through a tube in the pod they boarded in the previous episode. The tube stops, and Finn, Jake and BMO all fall out onto the beach of the island Susan(Kara) is on. They immediately see Susan walking in a trance along the beach. They try to get her attention but she just stares at a specific spot in the beach, saying "Find them. Catch them"

The episode cuts to another flashback at the same spot on the beach. A group of Hiders are boarding a boat while a siren is going and Dr. Gross's voice is coming out of a speaker saying "Find them. Catch them. Bring back those hiders y'all!" Susan and two other Seekers are running down a hill to catch them. Susan picks up the boat with all of the Hiders in it, and shakes nearly all of them out. She sees one more Hider crammed between the walls of the boat, Martin. Susan shakes Martin off and then throws the boat on his legs, breaking them, leaving Martin unconscious. Susan picks up Martin and carries him over her shoulder. She walks to the other Seekers, carrying the Hiders, all chanting" Find them, catch them, help them." After the Seekers take back the Hiders, Frieda's head pops up from a cliff, revealing that she has been watching them, looking worried.

It shows Minerva tending to her patients in a futuristic hospital when a speaker tells her she has a new patient. She goes outside near a carpark and sees Susan carrying Martin on her shoulder. Susan puts her on a wheelchair that Minerva is holding. Minerva says that Martin will be at full health the next morning. Susan walks to her living quarters, into her room. It then cuts to the present, where everything is overgrown and abandoned. Susan walks through looking around, and into her room. She sits on the bed while Jake, Finn and BMO walk in, observing what she's doing.

There is another flashback which shows Susan sleeping in her bed. There is a knock on the window from Frieda, who wants to hang with Susan on the roof. They lie down on the roof of the living quarters and talk. Frieda gives many hints to wanting to escape the island but Susan is very supportive of The Founder's Plan. The next day Susan is in class and sees Frieda outside, reading a book. Susan waves, but Frieda doesn't wave back and then vibrates a bit. Susan realizes that she was a hologram and exclaims that she has to go pee. She flips her desk and sprints out of the classroom. She sees Frieda climbing a wild fence and chases her. They both make it over the fence and Susan chases Frieda down a hill leading to the beach. Susan asks Frieda if she is trying to leave her and the island but Frieda says they should talk in a nearby cave.

Susan carries Frieda to the cave and drops her when she sees a mechanical boat. Frieda says it's a foolproof way out of here, but Susan doesn't know why Frieda would leave her. Frieda says that they have no freedom on the island and she can never be herself on the islands. She says that all she needs to build the boat is an engine and Susan can carry it down there easily. Susan says she needs to think about it and as she leaves Frieda asks her if she's going to tell on her for escaping. Susan says it's gonna be OK.

Susan walks up to Dr. Gross's office and apologizes for running off. She then asks if someone left the island, but it worked for them will it still be OK? Dr. Gross realizes that Susan has seen a Hider preparing to leave. Dr. Gross says humans tried to leave the island but were nearly destroyed, and it's the Seekers responsibility to guide the misguided Hiders. Susan isn't completely convinced. She goes back to Frieda and gives her an engine. Susan carries Frieda's boat outside to the ocean. Frieda is about to depart when she tells Susan to go with her. Susan is about to talk when Dr. Gross walks onto the beach.

Dr. Gross says "Go fetch" and gets a remote control and points it at Susan. Susan's eyes turn static and so does her implant. She robotically pulls Frieda's hat off, revealing her long, red, luscious hair. Susan picks Frieda up and carries her on her shoulder. Frieda's crying and complaining, trying to get Susan to snap out of her robotic trance. To add insult to injury, Susan destroys Frieda's boat. Susan then follows Dr. Gross up the beach, carrying Frieda on her back. Dr. Gross hums The Founder's Song.

The episodes finishes by cutting to the present again, showing Susan digging in the sand. She finds Frieda's hat, saying "Kara... My name, is Kara"

Promo for Islands
Add a photo to this gallery 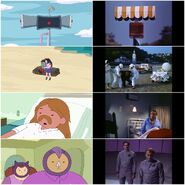 Retrieved from "https://adventuretime.fandom.com/wiki/Hide_and_Seek?oldid=819061"
Community content is available under CC-BY-SA unless otherwise noted.