Finn takes the place of Marceline's henchman, and he finds out how hard it is to obey her strange ways.

They land at a nearby house, and Marceline orders Finn to open the door. Finn refuses to do so, stating that he would not if innocent people would be hurt. Marceline reminds him that he is her henchman and has no choice in the matter, and so he opens the door for her. Marceline tells Finn to hold down the victim, Eberhardt, and Finn says that he was sorry before doing as he was ordered. Finn thinks Marceline is going to suck Eberhardt's blood and attempts to stop her, but Marceline disables Finn's arms temporarily. Finn is horrified when Marceline sinks her teeth into Eberhardt, but she was actually sucking the red out of his bowtie. Eberhardt is incredibly happy with his new white bowtie and Marceline reminds Finn that she eats the color red, not just blood. During this, Jake is watching through a window, claiming that he has a plan to relieve Finn of his henchman duties. Marceline notices this, and turns into a strange snake-like figure, to scare Jake. He runs into the nearby bushes, screaming "I'm not running away, Finn! This is just part of my plan!"

The two leave Eberhardt's house, and Finn is trying to figure out what is wrong with Marceline. Marceline asks Finn, "Thinking about how that dude's bowtie sort of looked like a bra?" to which he says, "No!" They then stop by a graveyard. Marceline revives all the skeletons to form an army using a resurrection chant. Marceline exclaims, "Are you ready to lead an evil army of the undead?!" Finn shouts, "Never!" but a skeleton "persuades" him into doing it. While they march toward the Duke and Duchess of Nuts' castle, Finn runs ahead and tries to warn them, but when Marceline finally arrives, it turns out that she was performing for them because it is the Duke of Nuts' second son's first birthday. Finn begins to notice the pattern in Marceline's orders and thinks a little about the situation before being interrupted by Lisby the Cashew Butler. He convinces him to stop thinking and just party.

Marceline then presents Finn with a cute dimple plant and offers him some of the fruit before ordering him to slay it with her ax-bass. Finn attempts to work out the trick to his latest order, unsure as to why she would ask him to kill something so cute. Finn hesitates and the plant grows huge and malicious. He tries to slay the plant but ends up being swallowed by it. Marceline kills the plant and Finn cuts his way out of its stomach. Finn then realizes that all her "evil" commands are really tricks that just seem evil and are only to mess with his head. The next day, the two go out for a walk in strawberry fields out in the sun.

Marceline brings along an umbrella and Finn asks if the sun can destroy her. She answers, "Yeah, it hurts, but I kinda like it. Reminds me of when I'd scrape up my knee as a kid and my mom patching me up afterwards." Finn responds by saying that Jake told him that he came out of a cabbage. Marceline then asks Finn if he wants to go strangle some pixies with her and Finn agrees. She is surprised by his casual attitude about it, saying pixie strangling is "hard core evil" and Finn tells her he knew that her evil deeds were not so evil after all. Marceline jokingly berates him for taking so long to figure out that she was not so bad. Suddenly Jake (cleverly disguised as a giant strawberry) leaps at Marceline and throws garlic at her, causing her to drop her umbrella and become exposed to the sun. Marceline falls to the ground, weakened, blistered, and in agony. Finn tells Jake that Marceline is not as evil as she seems, but Jake believes he is under a vampire spell of some sort. Marceline hides herself under her umbrella and Finn rushes over to it, lifting up one side telling her a plan he just thought of.

Jake leaps forwards and puts a stake through it, lifting up the umbrella to reveal a cloud of smoke in Marceline's shape. Finn tells Jake he faced his vampire fear and saved him. Jake leaves, happy to have saved his friend. Finn remains for a moment, picking up the umbrella. Marceline emerges from Finn's backpack in her small bat form (this was a part of Finn's plan; he told her this quickly when he lifted up the side of her umbrella) and tells Finn that she totally owes him and that he was fired as her henchman because it would not be fun if she could not trick him. They still promise to go pixie strangling the next day. Marceline then picks up her umbrella and flies away. 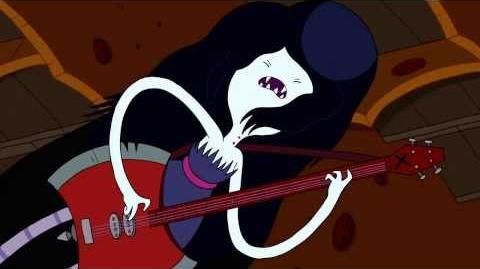 Adventure Time Songs Fisherman
Add a photo to this gallery

A nut lady from Episode "Henchmen"

Marceline's appearance for this episode

Marceline "dying" in the sun 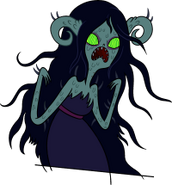 Dimple Plant Monster
Add a photo to this gallery

A boneyard with what looks like a dragon skeleton 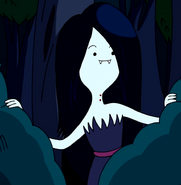 "Yes, Jake? What would you like to talk about?!" 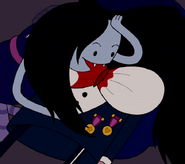 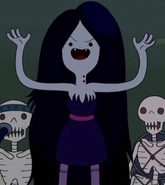 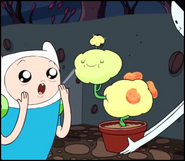 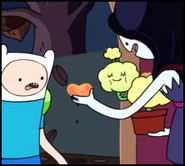 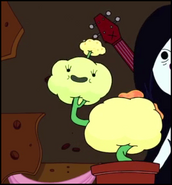 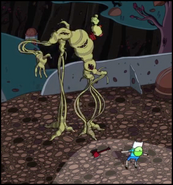 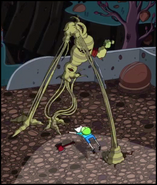 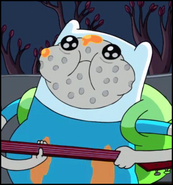 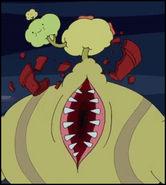 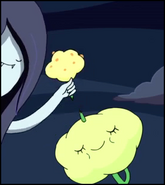 Marceline with her umbrella

Retrieved from "https://adventuretime.fandom.com/wiki/Henchman?oldid=852290"
Community content is available under CC-BY-SA unless otherwise noted.