"Heat Signature" is the twenty-sixth episode in the second season of Adventure Time. It is the fifty-second episode overall.

Marceline plays a prank on Finn and Jake by making them believe they're vampires, but it goes too far and escalates when they're manipulated by her ghost friends.

It's dusk, and Finn and Jake are visiting Marceline to show her and her friends the movie Heat Signature. When they enter her house, Marceline introduces them to her ghost friends, Wendy, Booboo, and Georgy. Finn and Jake then try to have a seat on Marceline's couch, but it is apparently very uncomfortable. Marceline says she never really uses her couch because she is always floating, so after a short session of deliberation between the two, Finn and Jake decide that they want to be turned into vampires or ghosts. Marceline agrees to turn them into vampires, but whispers to her friends that she has something even better in mind. She tells the boys to close their eyes so she can perform the Biting Ritual. Rather than biting them, she merely pinches their necks and dabs ketchup on them to simulate a bite wound. When she is done, Finn and Jake are asked how they feel; Finn says he feels the same and Jake says his neck hurts.

Marceline and the ghosts then continue their prank by making Finn and Jake think that they can suck the color red from things and turn invisible. While thinking that they're invisible, the duo tries to mess with Lumpy Space Princess, who is in the woods. However, it soon becomes apparent that the ghosts are more concerned with harming Finn and Jake when they kick the two for no reason and try to kill them by tossing them off a tower while telling them to fly. Marceline becomes angry at her friends for trying to harm Finn and Jake, but they simply ignore her and try to eat Finn and Jake's guts through their brains after they lure them to their home, 25 Blood Drive, with an invitation to a party. Marceline warns Finn and Jake of the imminent danger, but they ignore her and attend the so called party anyway, where they are almost devoured. Marceline arrives just in time, seemingly to save them, but she says that she cannot defeat the ghosts and was only there to apologize. Finn laments that they are about to die just because they wanted to be comfortable watching Heat Signature. This reminds the ghosts that they wanted to watch the movie, so they go back to Marceline's house and watch it. Finn and Jake, however, would rather be eaten than have to endure the uncomfortable furniture, but Marceline and the ghosts are so captivated by the movie that they do not even care.

New (and modified) clothes for Marceline

Lumpy Space Princess as a hobo

Lumpy Space Princess's can of beans

A bag of chips

Marceline's ghost friends' house.
Add a photo to this gallery

LSP punching Jake after Finn accidentally knocks over her can of beans. 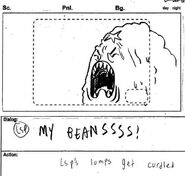 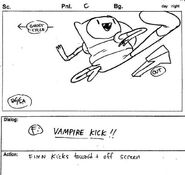 Storyboard of the movie.
Add a photo to this gallery

Retrieved from "https://adventuretime.fandom.com/wiki/Heat_Signature_(episode)?oldid=785078"
Community content is available under CC-BY-SA unless otherwise noted.