"Sow, Do You Like Them Apples"
The hawks are two large birds that appear in the episode "The Eyes" when Finn and Jake dress the horse up as a bunny. The hawks attack Finn and Jake, then grab the horse and fly away.

A Hawk can be seen in the episode, "Sow, Do You Like Them Apples," stealing a Rat.

They have dark-gray bodies and wings, with light-gray heads and wing tips. They have orange feet and beaks and solid black eyes. They are approximately the same size as Finn. 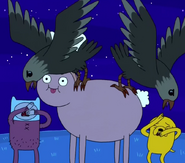 Hawks taking the horse away
Add a photo to this gallery
Retrieved from "https://adventuretime.fandom.com/wiki/Hawk?oldid=832625"
Community content is available under CC-BY-SA unless otherwise noted.