Have You Seen the Muffin Mess

Have You Seen the Muffin Mess

Steve Wolfhard
"Have You Seen the Muffin Mess" is the second short episode that is part of the sixth season of Adventure Time.

The story starts out with Bonnibel sitting at a desk in Gumbald's cabin. She drops a nanite into a muffin tray, stating that she hopes muffins aren't easy to make. She puts an extremely small muffin recipe into a compartment, and closes it again. The nanite begins multiplying, until a muffin appears in front of her in the tray. She lifts her goggles up, considering the experiment a success. The muffins continue multiplying, filling the tray. Bonnibel pauses, not having expected this. She commands the nanites to stop multiplying, though more muffins just appear in place of her lower arm. She yells, running from the cabin as her desk turns into muffins. The entire cabin is then seen turning into muffins as Bonnie looks on from further down the hill. She calls Finn while stretching out the rest of her arm. The scene switches to Jake looking at Finn's sick body. Jake picks up the phone, and Bonnie explains her situation. She asks him to come over and help with a catastrophe, though Jake isn't sure if he can. He says that Finn still has a Rat Disease from the previous episode. Finn however is determined to do it.

The scene then switches to Jake approaching Bonnie with Finn on a stretcher made from his body. He sets Finn down, and he stands up in front of Princess Bubblegum. She asks if Finn's up to this, and begins explaining how to stop the muffins. She says that Finn must not touch the muffins, and that he has to find the Alpha Nanite to stop the muffins from duplicating. Finn lets out a raspy "yup," and wobbles off to find the muffins. As he walks on top of them, the muffins chomp his socks and shoes off. He collapses, letting out a disease-filled breath. This causes the muffins to fuse with Finn's rat germs into one large mutant muffin giant. It says that "we can see you when you go Number 1." It then walks off, repeating "Beware!" Jake says "Huh!" and the short ends.

Have You Seen the Muffin Mess Adventure Time Cartoon Network

Have You Seen the Muffin Mess storyboard panel

Bonnie molding her arm back 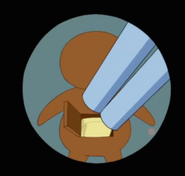 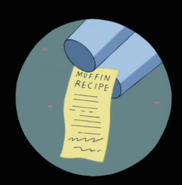