"Dad's Dungeon"
The Hamburger Monster appeared in the episode "Dad's Dungeon," along with the Hot Dog Monster in the first trial. It seems that it could have been something else that Jake wanted. As Finn notes, Jake said he wanted hamburgers, and Finn himself said he wanted hot dogs earlier in the same day, implying they might change into different objects. Jake kicks both of the heads off the monster, but like the Hot Dog Monster it lives despite significant bodily harm. As they leave, Jake tries to eat a lifeless-looking burger arm that got caught in the rubble as the door caved in, but Finn slaps him.

The Hamburger Monster has two hamburger heads connected to the body by two hamburger necks each. The body of the creature is one giant hamburger with ketchup dripping out of it. Its limbs are a bunch of hamburgers that stick to each other, and it has slightly bigger hamburgers as its hands and feet. The hamburger hands are connected to its arms at their sides, rather than at the top of the bun. The Hamburger Monster's face is three hamburgers lined up side by side. On its face, the left and right ones both seem to have tomato slices on the top, making them appear as eyes, and the one in the middle can flap its top bun up to make noises. When the hamburger mouth opens, it reveals cheese and three pickles. In general, it appears that all the hamburgers are simple, composed of just the burger itself and ketchup. The larger buns all have some visible sesame seeds. 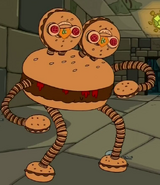 Jake trying to eat the Hamburger Monster after he killed him
Español
Community content is available under CC-BY-SA unless otherwise noted.
Advertisement