Hambone is one of the main characters in the Adventure Time comic "Ice King". He is shown to be a protagonist with good intentions but is revealed to be an antagonist who follows Lord Lazertron the Third and is a former member of The Dark Moon Esbats. He also claims to be "the best hypnotic based bad boy wizard this side of the candy kingdom".

He is a stereotypical "gangsta", He talks in slang and lingo and likes to break dance, and pickpocket. He doesn't really like wearing sunglasses but Lord Lazertron the Third made him wear them to look "cool". He is a master of Hypnotic based magic.

He has green skin and a half oval sphere for a head, has vampire like fangs and a snake like tounge. He is mostly seen wearing Dark Sunglasses, a dark blue short sleeve over shirt, a gray long sleeve under shirt, finger-less gloves, a cyan sweater tied around his waist, Dark green shaggy pants with a lighter shade that was patched on, and Dark Blue boots. He also has the ability to summon his 3rd eye to cast spells.

His age is never officially revealed, however, he is a teenager because an angry man yells, "HEY! I told you darn kids to stop hanging out back here!!" to him and his squad. 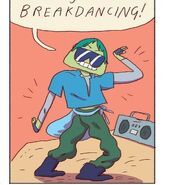