Guy Samuel is the mysterious keyboardist of Marceline's band, "Scream Queens." In Issue 5, it is revealed that Guy is a changeling and able to change forms as he pleases. He seems to have a crush on Princess Bubblegum.

Guy is mysterious, moody and dreamy. He seems to have a bad habit of lying about what kind of creature he is. Twice in the comic he tries to pass himself off as something that he isn't in order to win the sympathy of Princess Bubblegum (once by pretending to be a werewolf and once more by pretending to be a werefish.) It is also heavily implied that he only pretends to be a mysterious character in order to make himself seem interesting and to make himself feel less angsty.

He has medium brown hair, wears a light grey shirt, denim pants, and has a short beard. He looks very much like a human in this form, but he can change his appearance at will. 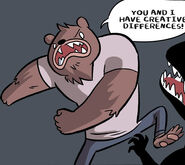 Other Forms
Español
Community content is available under CC-BY-SA unless otherwise noted.
Advertisement