Tom Kenny
Guntalina is one of Ice King's penguins as seen in "Princess Potluck." Ice King tells her to serve some food to the Snow Men at his party, but she ends up sticking the condiments in the Snow Men's bodies. She reappears again in "Orgalorg."

Her appearance is no different from the other penguins in the series, with the exception of her pink bow and eyelashes. 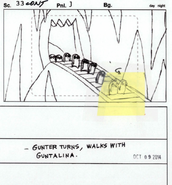 Guntalina with Gunther at the House Party in "Orgalorg"
Español Français
Community content is available under CC-BY-SA unless otherwise noted.
Advertisement