The Gumball Guardians (also known as Guardians of the Royal Promise) make their first appearances in the episode "Slumber Party Panic." They are first seen on opposite sides of Princess Bubblegum's Castle blowing bubbles. The Guardians will freeze time and appear to anyone who breaks a royal promise and destroy them. Usually they hold a (literal) trial by fire to the promise-breaker. However, in "Slumber Party Panic," Princess Bubblegum manages to stop the trial by fire because of her friendship with Finn, so instead they ask Finn a math question: originally long and very complex (and involving an approximation of pi), but one of the Guardians changes his mind and instead gives the question of what is "two plus two." Finn is terrible at math, yet correctly guesses "four." The guardians' heads then blow up, reversing time to just before they came to grab Finn and the princess. They then go back to their places on the sides of the Candy Palace and begin blowing bubbles again.

They also appear in "Ricardio the Heart Guy" when Finn and Jake are spying on Ricardio in the Candy Kingdom, though they remain dormant in this episode. In "Mortal Recoil," Princess Bubblegum (while possessed by The Lich) attacked one of the guardians. It said, "Evil presence detected! Must defend!" while grabbing the hands of the princess. It was defeated, however, and can later be seen on the ground with a broken head. In "The Lich," one of the guardians detects the Lich disguised as Billy , where it proceeds to attack. They appear almost every episode that the entire Candy Kingdom is shown, most of the time sitting on the left and right walls of the kingdom, blowing bubbles.

The Gumball Guardians are two giant gumball machine men who wear ice cream cones on their heads as hats. Their skin may or may not be pink, as it is possible they could simply be wearing colorful shirts.

In the opening sequence.

They change to an easier problem. 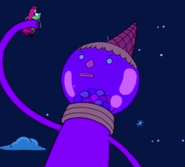 The guardians grab Finn and the Princess.

A guardian model on a chrome stand. 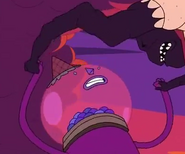 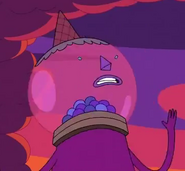 The Guardian Of the Royal Promise Can Be seen on both sides of the Candy Kingdom
Gumball.png
Add a photo to this gallery
Retrieved from "https://adventuretime.fandom.com/wiki/Gumball_Guardian?oldid=354381"
Community content is available under CC-BY-SA unless otherwise noted.