Gum People (also called Gum Golems or Bubblegum Humanoids) are a recurring race of Candy People in the Adventure Time franchise. Candy is one of the four main elements that make up the Land of Ooo, the others being slime, fire, and ice. Gum people naturally take the appearance of humanoids composed of bubblegum, having pink hair and skin tones. The Mother Gum, a collection of living blob-like beings made of mutated bubblegum, spawned the only known currently living gum people, Princess Bubblegum, ruler of the Candy Kingdom, and her brother, Neddy, a Candy Dragon. Other gum people, such as Gumbald, Lolly, and Chicle, were created by Princess Bubblegum.

Chatsberry was an ancient gum person and a former Candy Elemental whose origins are currently unknown. 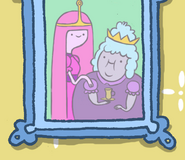