Sleepy Sam
Hunny Bunny
Bouncy Bee
Guardians of Sunshine is a side-scrolling adventure video game that is crucial to the plot of the episode of the same name. Finn and Jake play it and lose repeatedly, claiming that if they were to face Sleepy Sam and the others in real life that they would win, which eventually leads them to trick BMO into transporting them into the game. While in the game, Finn and Jake look pixelated, but Jake still has his stretchy powers.

In the game, the character is an adventurer who travels down into a dark dungeon where he must pass lava pits and fight monsters including Sleepy Sam, Hunny Bunny, and Bouncy Bee. The game includes lava pits and coins much like Super Mario. Defeating enemies and collecting coins are the ways to get points. Another element in the game is the Bomba, which automatically kills an enemy. However, only one Bomba appears in the game and Finn always uses it on Hunny Bunny. There is no way to get it when trapped in the game, and enemies become insanely tough. Even the lava pits are hard to get past, which were thought to be the easy parts of the game.

Before entering the dungeon it says that the player is currently in level 1, however it could be that there is only one level in the game. The game follows the sequence of defeating Bouncy Bee, then Hunny Bunny and finally Sleepy Sam, but it is unknown what happens if the player defeats Sleepy Sam since neither Finn nor Jake have been able to do it. It is assumed that defeating Sleepy Sam is the final stage in the game; when the monsters are released into Ooo only the three mentioned above come out.

Fire pits are an obstacle in the game. They seem like a short distance on the screen but are huge in "reality." Falling into a fire pit causes instant death and the loss of a life.

Coins are a way to get points in the game. In the game, the coins are worth fifty points each. While in the game, Jake picks them up with the intent of bringing them back to the real world and becoming rich, but Hunny Bunny attacks him, which causes him to lose all but one coin. When they get out of the game, the coin Jake saved turns out to be a penny.

Left edge of the game. 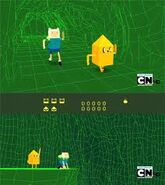 Add a photo to this gallery
Retrieved from "https://adventuretime.fandom.com/wiki/Guardians_of_Sunshine_(game)?oldid=850342"
Community content is available under CC-BY-SA unless otherwise noted.