"The Light Cloud"
The Guardian (also known as The Colossus of the Deep or The Island's Colossus) is a colossal robot that protects the Humans in the Islands by keeping anyone living there inside, and keeping any intruder out. It makes its first appearance in "The Visitor" during a flashback Martin had when he "answered" Finn's questions about Minerva. Guardian appears at the end of "Whipple the Happy Dragon," where it drops Finn, Jake, BMO, and Susan into the sea. The episode "Min and Marty" revealed that the guardian separated Finn and Martin because it thought that they were attempting to flee. After Finn convinced his mother, Minerva Campbell, that the outside world is not all monsters, mutants, and danger, she told the guardian "it's time to stand down," and it was then deactivated. Guardian usually spends most of its time underwater, but surfaces when a human is about to leave or when a threat gets too close to the islands.

Guardian is a robotic sentinel, and can be identified by its grey color scheme, the large "G" on the left of its chest and a broken left eye. It is gargantuan and powerful, able to chop a cargo ship in half as demonstrated in Minerva's simulation.

Guardian protects humans inhabiting the islands from outside forces but will try to prevent any humans from leaving, however it can be ordered to stand down by Minerva. Guardian might be able to feel pain, evidenced by the guardian's shrieks and reaction after Martian detonates his eye with a laser pointer. 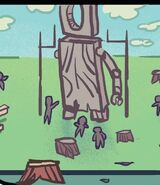