Maurice LaMarche
Grand Master Wizard is first seen in "Wizard Battle." He is in charge of enforcing the rules of and presiding over the Wizard Battle. He is a stickler of the rules and will not allow anything but magic to be used in the Wizard Battle, and anyone who uses only science or weapons cannot participate. If a contestant forfeits or otherwise tries to leave the Wizard Battle, he transforms them into a cat. On that note it should be said that he loves cats and cats can be seen on and around his person at most times. He was too distracted by playing with his cats to notice Ice King using a weapon to cheat.

In "Wizards Only, Fools " Finn, Jake, and Princess Bubblegum are taken to him when they trespass in Wizard City. He says he will let them go if Princess Bubblegum says that wizards rule. When the princess refuses he sends them to wizard prison. It can be noted that he said that the princess used to be a friend of the wizard community.

In "Betty," the Grand Master Wizard is too late to stop the Secret Society from summoning the creature Bella Noche, whom the Grand Master Wizard is aware of and knows is a creature of anti-magic. He is later seen leading the de-powered wizards against Bella Noche to save Wizard City, and is upset when Ron James' potion for "double-negative magic" only makes Bella Noche more powerful, as Ron James claims to "always deliver." His powers are restored with the other wizards' when Betty Grof defeats Bella Noche. Earlier, he expressed sympathy to Ice King when Bella Noche's anti-magic turned Ice King back into his human form of Simon Petrikov, and he shakes Ice King in excitement when Wizard City is saved.

He has a thick white jacket that could be mistaken as a coat of fur despite the sleeves on it; it covers his whole body. He has yellow skin on his arms at least. He has eyes that resemble cut emeralds, and he wears a thin golden crown with a rod branching up that is set with a single green jewel set at the peak. The top of his head has a different yellow-stained color that doesn't match his white beard and robe, it looks like his head hair but could also be part of his crown.

The Grand Master Wizard erects a semi-transparent sky barrier around the stadium to prevent people from leaving. He also fires a green ray from the top of the emerald in his crown, though it may be that the rays of the setting sun caused it and the crown itself is magical. He can also turn people into cats and seems to be able to spit cats when startled. He was seen using a crossbow against Bella Noche in "Betty." 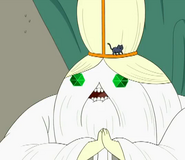