"Goliad" is the tenth episode in the fourth season of Adventure Time. It's the eighty-eighth episode overall.

Princess Bubblegum is concerned over her mortality, and reveals her designated successor to Finn and Jake. However, things get out of control when the heir turns against Princess Bubblegum.

While Finn and Jake are doing activities near the Candy Kingdom, Peppermint Butler informs them that Princess Bubblegum wants to see them. The princess explains that after her brush with death at the hands of the Lich, she realized she cannot live forever, so she used science and some of her DNA to create an heir that could live forever. The heir is Goliad, a pink Sphinx with a mound on her forehead and the voice of a young British child. Finn and Jake introduce themselves to Goliad, who takes a liking to them. After Princess Bubblegum plucks one of Finn's hairs, he notices that she is extremely exhausted. She explains that she has been awake for 83 hours straight, teaching Goliad about being a good ruler. Finn and Jake volunteer to look after Goliad while the princess rests, and she agrees.

The two friends take the curious sphinx to a preschool, where Finn builds an obstacle course. Jake introduces her to the other children, but is dismayed to find that they are extremely unruly and poorly behaved. Jake is forced to yell at the children to make them stop assaulting him. Later Goliad imitates Jake's harsh discipline, yelling at the children in an attempt at being a leader. Finn rebukes Goliad, and suggests that she use her brain to lead instead of force. Goliad reveals that her mound concealed a third eye, and proceeds to psychically control Finn and the obstacles in the course for a perfect completion. She explains that with her in control, everything would be perfect. Worried about Goliad's behavior, Finn and Jake take her to the princess for help.

Princess Bubblegum tries to teach Goliad that compromise is the best way to rule, citing how a bee and a flower help each other. Goliad counters by explaining that the bee does not care if it hurts or kills the flower because the flower is weaker. Goliad states that she is the strongest so she is in control. Princess Bubblegum thinks to herself that her creation has been corrupted and would need to be disassembled and started from scratch, but Goliad reveals she can read minds and begins to destroy the castle. Princess Bubblegum tells Finn and Jake that Goliad is too powerful to be defeated by them. She instructs them to distract Goliad long enough to create another Candy Sphinx to fight back, and that they need to not think about the plan or Goliad will find out.

Finn and Jake confront Goliad but are beaten by her psychic powers. Goliad tries to read Finn's mind, and Finn narrowly avoids revealing the plan by interrupting his memories with nonsense. The new creature; another sphinx with an eagle's head, white feathers, and golden hair; rescues Finn and battles Goliad. Goliad tries to convince her brother, named Stormo, that they should work together, but Stormo refuses by screeching. They engage in a psychic showdown, but with their powers matched the two creatures are eternally locked in a mental stalemate. Princess Bubblegum tells Finn that Stormo was created using DNA from the hair she took earlier, and thus inherited Finn's heroic qualities. That was why he saved Finn instead of controlling them, and why he sacrificed himself to keep Goliad in check for all eternity. Finn realizes that Stormo is like a son to him, and wishes him a Happy Birthday. 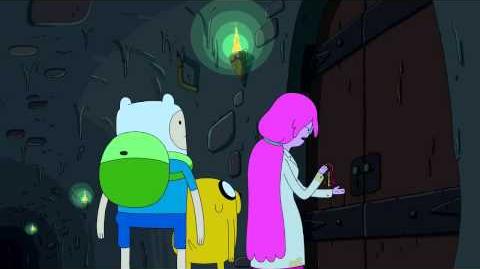 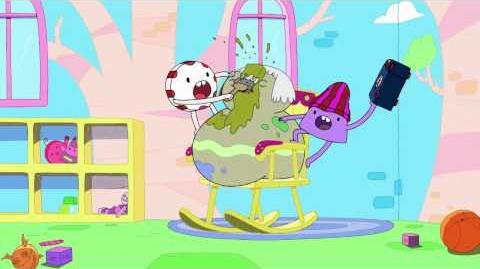 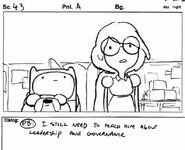 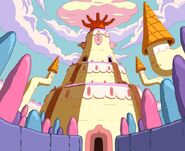 "Ima buff baby that can dance like a man!"

The snail is seen again