Ako Castuera
Tom Herpich
"Go With Me" is the twentieth episode in the second season of Adventure Time. It's the forty-sixth episode overall.

Jake and Marceline both give Finn advice for asking Princess Bubblegum on a date.

The episode starts with Finn and Jake having a picnic and looking at the sunset. Jake mentions the Couples Only Movie Night and asks Finn who he will take. Finn says that he does not know and asks Jake the same question. Jake answers that he will take Lady Rainicorn. A duck walks by and Finn picks it up, saying that he will bring the duck to the movies, but Jake says that he has to be somebody he can "smooch." Finn tries to kiss the duck but the duck panics and flies away. Jake mentions that Finn does not have to kiss but find somebody whom he CAN kiss. Finn then picks up the blanket and kisses it. Jake then tells Finn to put the blanket down and have a seat so he can explain couples to him.

The scene then skips to the Tree Fort with Jake asking who Finn's going to call, to which Finn replies "Someone I don't have to kiss." He then uses his phone to call Princess Bubblegum. He asks her to the Couples Only Movie Night and Princess Bubblegum says that it sounds romantic. Finn quickly interrupts saying that he was just wondering if she would like to go. Princess Bubblegum says that she cannot go because she is practicing for the Whistling Choir Death Match Championship. Finn tries to say something but Princess Bubblegum quickly hangs up and continues to practice. Finn says to Jake that she does not want to go, but Jake says that she actually does want to go and that they need to help her "realize" this. He announces that he is going to call Marceline (which is a strange idea for Jake, because he is usually afraid to talk to her). Finn wonders why, and Jake said that his fear was based on "ignorance." Marceline answers, and Jake asks her to help make Princess Bubblegum jealous. The viewer can see both ways that Marceline was actually hiding under the green coat in the background and comes up just to scare Jake. Finn, showing no fear, simply chuckles and asks if she is going to help, to which she agrees, saying that it will be funny.

The scene then skips to the Candy Kingdom with Jake talking about the plan, which is to have Finn say funny things and for Marceline to laugh out loud at it. Finn says a few words that Marceline quickly begins to laugh at, causing Princess Bubblegum to notice her and Finn outside her window. She greets Finn in her normally polite way but addresses Marceline in a somewhat rude way. Marceline takes this in stride and also says hello while calling her "Bonnibel." Princess Bubblegum asks Finn what was so funny, but since nothing was ever funny to begin with, he says that it is "something" in order to feign forgetfulness. Princess Bubblegum tells them to keep it down because she is still trying to whistle practice by using her whistling book. Jake believes that his plan was somewhat of a success, so he begins "Phase Two" and goes to get something.

Meanwhile, Marceline suggests that Finn take some advice from a "real" girl, referring to herself. Finn interrupts, saying that Jake's plan was "powerful," but Marceline asks how Jake is going to know what a real girl wants more than a real girl. Finn agrees, and Marceline says that they are going to need something fun, because girls love fun more than anything (although her interpretation of fun proves to be highly unconventional). Finn interrupts, saying that she said the word "fun" so many times that it sounds weird and starts to repeat the word to try out its new surreal sound.

Marceline asks him what he likes to do for fun. He says that he likes to wrestle and fight, although this only serves to lower his spirits as he does not think that any women would find that sort of thing appealing. Marceline thinks that this is a good idea and says if he wrestles Princess Bubblegum, she will think he is fun.

After Marceline leaves, Jake arrives with a Lute suit and a lute. Finn is confused, but Jake quickly explains that girls love it and to trust him. As Finn walks into the castle with the Lute Suit on and Jake disguised as a chair, Marceline arrives and asks what Finn is wearing. Jake reveals himself and answers her question, saying that Finn looks adorable in it. Marceline says that it is going to ruin the plan. Jake asks what Marceline is talking about, and Finn says that he was trying Marceline's idea also. Jake, upset, asks Finn about his idea while Marceline sticks her snake-like tongue at him. As both of them hear Princess Bubblegum's whistling, they hide: Jake reverting into a chair, and Marceline turning into a bat and hiding near the ceiling.

Jake, dizzy, comes out of the lute with Marceline landing next to them while turning back into her normal form and saying that the Lute Suit was ridiculous. Jake becomes offended and asked if Finn could believe her. Finn says that it felt a little silly, so Jake tells him to give it back. Finn apologizes and returns the suit. Jake then takes the suit and the lute, barks and leaves.

Marceline notes how upset Jake seemed, but Finn reassures her that all he needs is some spaghetti. She then says that the only thing that girls love more than fun is excitement, and suggests that Princess Bubblegum should be chased by wolves. Marceline takes Finn to a roaming wolf pack, where she and Finn go feral. They howl at the moon, bite and wrestle the wolves, and ride them in a stampede. Marceline and Finn grab two of the wolves and slip them into Princess Bubblegum's bedroom while she sleeps. She flees her room in terror, straining to hold the door closed behind her. Finn brags that he put the wolves there because it is exciting. Princess Bubblegum banishes Finn from the Candy Kingdom until he stops acting like a "psycho."

Realizing Princess Bubblegum probably just does not like him, Marceline comforts him, saying that he would be bored with "Bonnie" in a week. Before she leaves, she gives Finn a kiss on the cheek. Finn realizes that all along, Marceline was the perfect girl to take to the movie. Finn asks if Marceline will come to the movie and Marceline says that Finn does not want to go down that road with her. Finn ignores Marceline and continues asking her to take her to the movies. Marceline then turns into a giant monster in an attempt to deter Finn's enthusiasm about dating her, but this fails. She turns back into a vampire and slams Finn onto the couch. Finn tries to wrestle her and puts her in a headlock, but Marceline quickly breaks the hold and says that she will not go to the movies with Finn because she does not like him "that way," going on to say that she has no interest in dating Finn.

Finn says that he was not looking for a girlfriend, just someone to go to the movies with. Marceline then agrees to go to the movie with Finn, but just as friends. While at the movie, they see several people (including Jake and Lady Rainicorn) kissing, which causes Finn to throw up. He then asks Marceline if she would like to leave, and she says yes. She pushes him through the movie screen just after the male character in the movie tells his lover "Nothing can ever tear us apart." Finn and Marceline then ride away on the pack of wolves they met earlier, tearing apart the screen the movie was projected at. 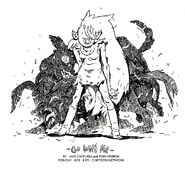 Marceline's look for this episode

One of Princess Bubblegum's outfits for this episode

Jake disguised as a chair 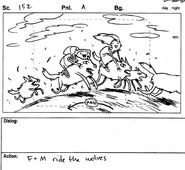 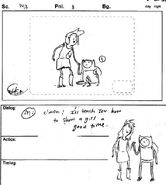 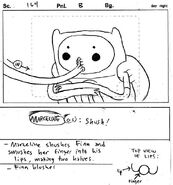 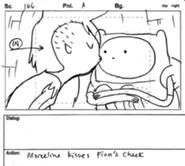 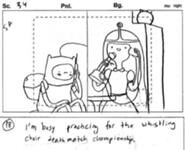 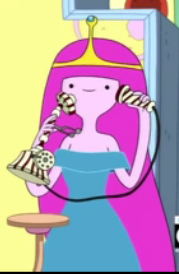 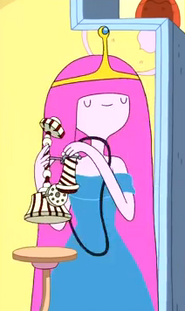 Marceline sticking her tongue out

Marceline as a bat

Finn and Marceline join in with the wolves. 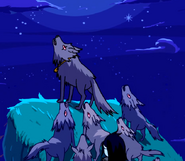 Finn and Marceline with the wolves 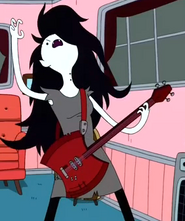 Marceline about to play her axe-bass

"Nothing can tear us apart."