Dee Bradley Baker
The Gnome Knight appears in the episode "The Pods." After Finn and Jake find him, he tells them he was a gnome knight who was transformed into a frog. He has been guarding three magical beans because one of them is evil, and he must prevent them from ever being planted. Finn offers to assume his quest and takes the beans, which causes the Gnome Knight to return to gnome form. Although Jake protests by saying he doesn't want the quest, the gnome quickly replies "Nope, too late," and promptly disintegrates, leaving behind his helmet and a pile of dust.

He is fat, with tiny arms and legs and a long beard that cover most of his face. He is blue-skinned and he has a golden helmet with a bean on the top. He has a brown shirt and dark red pants. Over it, he has a piece of cloth with a crown-like image on its right and three gold beans on its left.

The Gnome Knight as dust

The Knight back into a gnome

The Gnome Knight on the verge of death 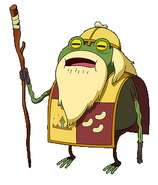