Michaela Dietz
Glassboy is a character who appears in "Obsidian" and resides in the Glass Kingdom.

At some point in time, Glassboy gained a crack on his forehead. This made everyone in the Glass Kingdom bully him - with the exception of See-Thru Princess, who was his only friend.

In hopes of healing his crack, Glassboy snuck into Larvo's chamber but accidentally woke him. He was imprisoned in the jail tower but was freed by See-Thru Princess so he could find Marceline who was believed to be the only one who can stop Larvo. After traveling for long he found himself in the Candy Kingdom where he stumbled upon Simon who was performing the song "Remember You" at an open mic. The song got his attention as it contained Marceline's name in the lyrics and Simon eventually brought Glassboy to Marceline, who agreed to help after he begged her. He travelled back to the Glass Kingdom with Marceline and Princess Bubblegum but once they arrived Marceline's song was unable to defeat Larvo again. He fell out with See-Thru Princess after the pressure from the other citizens made her lash out and ask him to get out of her face. In response, Glassboy wrote an angry song "See Through" which he preformed for Marceline. In the end, Glassboy helped save the day when he lured Larvo back to his cave before getting knocked out by the blast from Bubblegum's force-field getting turned to full-blast. Marceline got through to Larvo who took on his true non-threatening form with her new more heart-felt song "Monster" and they were all saved from the cave by See Through Princess who smashed the field-generator. In the end, the Glass Kingdom citizens revealed they too had cracks, apologizing for bullying him and Glassboy ended his adventure performing "Eternity With You".

Glassboy is a young boy made out of light blue glass and has a sizeable crack running down the middle of his head. While trying to repair himself, he accidentally unleashes an ancient dragon imprisoned under the Glass Kingdom.[1] 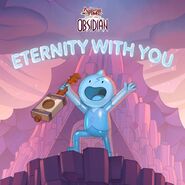 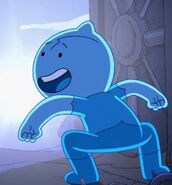