Dee Bradley Baker
Grey DeLisle
Kent Osborne
Pendleton Ward
Gladiator Ghosts appear in the episode "Morituri Te Salutamus." The known names of the gladiators are Hyperion and Primo, Priscus and Verus, Amazonia and Achillea, Triumphus, Rutuba, Tetraides, and Romulus and Remus.[1][2] When they were alive they were forced by the Fight King to fight other ghost gladiators and then eventually each other. As Finn and Jake fought them they were screaming cries for forgiveness and the names of the friends they killed or were killed by. After Finn killed the Fight King by shattering his sword, the ghosts were freed and ascended into the sky in pairs, followed by the arena they were imprisoned in.

The ghosts appear to look as they were when they died, including one who is decapitated. Some of them seem to be composed of two people melded together, as with the two-headed gladiator Romulus & Remus. 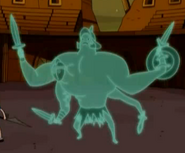