"Come Along With Me"(cameo)
Gibbon is the future son of Charlie, and the supposed patriarch of the future Pup Kingdom. He made his first appearance in a vision that his mother experienced in "Daddy-Daughter Card Wars". He is a crossbreed of rainicorn, dog, shape-shifter, and some unspecified species.

He appears at an older age in the opening of the series finale "Come Along With Me." At some point, as shown in the intro to the series finale, one of Gibbon's eyes was replaced by one of the Ice Thing's gems.  This has been confirmed by Steve Wolfhard to have granted him immortality, magical abilities, and has given him similar physical attributes to the Ice King.

Gibbon appears fully matured by the time Charlie is in her fifties. He is born when Charlie is in her thirties.[1] His fur is a brownish-gray, and is more shaggy than that everyone else in his family. Gibbon's jowl and eyes, or rather his face in general is identical to Jake's, much like Kim Kil Whan. He possesses a bushy tail, and his limbs appear to have no appendages. 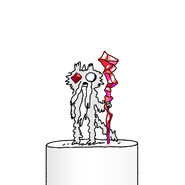 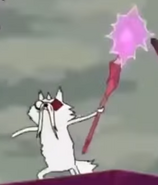 Retrieved from "https://adventuretime.fandom.com/wiki/Gibbon?oldid=789582"
Community content is available under CC-BY-SA unless otherwise noted.