Steve Little
Ghost Man first appears in "Blood Under the Skin." Finn and Jake encounter him in the Home Of Zeldron's Armor. He is highly addicted to the game Drop Ball and will not let anyone pass unless they beat his high score, which is 6. Finn and Jake sneak past him while he is instructing them on playing Drop Ball, but when they get the armor, he becomes angry and turns into a monster because they were not listening to him. He then mistakes Jake for his mother while Jake is wearing the Armor of Zeldron. Jake tells him to go outside, and he complies. This causes him to revert to his normal self and cures him of his addiction to Drop Ball. He thanks them and then re-appears briefly in the episode "Paper Pete" reading a book. He appears again in "The Lich."

Ghost Man is a semi-transparent pale green color. His torso is shaped like a bean, and his butt is the most noticeable feature on his body. He is vaguely humanoid, though significantly simpler in shape. He has thicker lips than most characters.

In his revived state, he looks exactly the same, but is a more saturated green color and is no longer transparent. 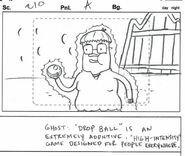