"Ghost Fly" is the seventeenth episode in the sixth season of Adventure Time. It's the one hundred and seventy-third episode overall.

Jake kills a fly that gets into his soup. However, he and Finn must get creative when the fly returns as a powerful ghost to haunt them.[3]

Inside the Tree Fort, BMO is practicing Karate techniques from a magazine, while Finn is reading a magazine called Adventure Boy, and Jake is trying to ignore his "restless leg" problem. Finn then says he's going to sleep, and Jake goes to the kitchen to make soup, hoping it will cure his restless leg. While he's at it, a fly comes by and starts drinking the soup. Jake quickly kills it, calling the fly a "disgusting, disgusting creature."

Afterwards, Jake tries to sleep, but he hears noises coming downstairs and decides to investigate. He then discovers that the fly he killed has turned into a ghost and is haunting the Tree Fort. Realizing that neither he, Finn, nor BMO can handle the situation, they run out of the Tree Fort only to run back in as the ghost fly teleports in front of them. They call Peppermint Butler for help with the ghost fly.

When he arrives, he draws protective circles around Finn, Jake, and BMO. He starts talking about his plan, and, using his tools that are inside the bag he brought with him, how he will banish the ghost fly. But right after he says it, the ghost fly comes, steals the bag and hides it inside a hole in the wall. Peppermint Butler then jumps out of the window and runs away in fear, leaving the three inside the circles in the house.

Jake tells everyone to wait until morning since that is allegedly when ghosts go to sleep, but Finn see the pages of his magazine flipping (probably the ghost fly turning it). He decides to to expand the circle with the chalk Peppermint Butler left behind in the hopes of finishing his comic. When he finishes drawing the expanded circle (which is actually in the shape of a woman), Finn proceeds to finish the comic. However, he starts acting strangely shortly after, soon revealing that he is possessed by the fly due to the loss of protection from the circle.

The fly, using Finn's body, starts flying after creating wings and spits on the floor in front of Jake and BMO. Jake says he wants to be a ghost so he can punch that fly in the face, so BMO says he can kill him using a technique it learned from the Karate magazine that stops the heart for some minutes. BMO would bring Jake back to life five minutes later, but he would need unfinished matters to actually become a ghost. So Jake starts telling a joke, and BMO kills him before he can finish, releasing Jake's soul as a ghost into the ghost world.

Ghost Jake tries to fight the ghost fly but fails and starts running, while the fly slices everything in its way with the ghost scythe he created. When they get to the kitchen, Jake accidentally spills the soup, and the ghost fly comes to drink it because that was its unfinished matter. Jake kills the fly's ghost and moments later is brought back to life, believing BMO did it, while he was in fact inside the hospital and Doctor Princess just brought him back to life using defibrillators. 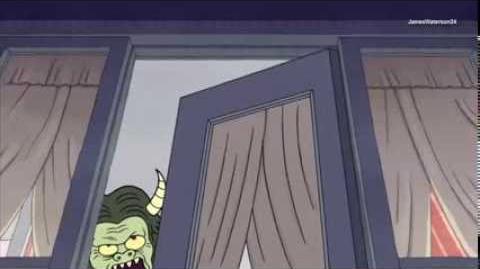 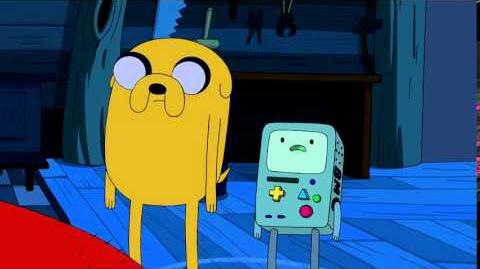