Gareth is a character that made his first appearance in "One Last Job." He is seen to have an abnormally large yellow head, which he uses to "possess" women.

Gareth is one of the members of Jake's old gang alongside Jake, Tiffany and the Flying Lettuce Brothers.

At the beginning of "One Last Job," Gareth is in the middle of a date with Lollipop Girl and hypnotizing her into giving him all she owned. However, he is unsuccessful because Jake's call interrupts him.

Gareth is yellow and wears a striped green and red tank top. He has black eyes and brown hair. His chiseled facial features and attractiveness may be a reason why he is also known as the "Lady Master."

Gareth has the ability to put women under the "spell" of his face and hypnotize them into adoring him. This ability was not used during the break-in in "One Last Job," but only in the beginning when he was on a date with Lollipop Girl. 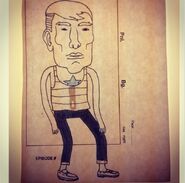 Concept art
Add a photo to this gallery

Add a photo to this gallery
Retrieved from "https://adventuretime.fandom.com/wiki/Gareth?oldid=772104"
Community content is available under CC-BY-SA unless otherwise noted.