View source
watch 01:14
Who is GOLB?
Do you like this video?
Play Sound

Semi-Deity (as of fusion with Betty)
Deity (originally)

"Come Along With Me"
GOLB is a malevolent entity who is the embodiment of chaos and disorder. He inhabits an unknown dimension and serves as the final antagonist of Adventure Time.

GOLB has a massive muscular red body and a cubic head topped with a pyramid with the bottom half fraying upward. He has four round yellow eyes with green pupils, with the two eyes on top slightly larger than the two below. Up close GOLB has cracks around his eyes and mouth. He has a forked tongue that is large and purple. His hands have three fingers and his feet have two toes and one dewclaw. He has orange-yellow talons on his fingers and toes.

After fusing with Betty, GOLB's appearance is altered, appearing as giant and red with a cubic/pyramid head somewhat similar in appearance to Grob Gob Glob Grod's but the shape appears to be that of Betty and her clothing, and their eyes are blue and green instead of yellow. The top row of eyes are slanted and almond-shaped, resembling Betty's pre-Mushroom War glasses.

He is mentioned later in "You Forgot Your Floaties." While inside Magic Man's mind, Betty witnesses a memory of him and Grob Gob Glob Grod discussing GOLB at an unknown date in the past. It is revealed that GOLB attacked Mars at some point and "took" Magic Man's wife, Margles. Grob Gob Glob Grod believes that GOLB will return and Magic Man agrees, using the threat of GOLB as a pretext for building a security system on Mars that takes the shape of Margles. Later, Magic Man changes his mind, claiming that Grob Gob Glob Grod is wrong and GOLB is "probably not coming back."

In "Temple of Mars," Betty speaks to Magic Man (now known as King Man) about her plan to both save Simon from the ice crown and to get back Margles from GOLB.

In "Come Along With Me," Betty, Maja, and Normal Man summon GOLB to Ooo, and he wreaks havoc by combining the candy people's mass to create hostile wraiths. Upon seeing him, Ice King has a flashback to an indeterminate date in the past when he researched GOLB as Simon. In the flashback, Simon describes GOLB as a "mysterious entity who embodies chaos," and states that "his presence is felt in every crevice where chaos lurks." When GOLB arrives, he swallows Finn, Betty, and Simon. Simon and Finn manage to escape before he digests them, but Betty stays behind to try to use the Ice Crown to wish GOLB away from their world. Her first wish to destroy GOLB fails because GOLB's power supersedes that of the Crown, but her subsequent wish for "the power to keep Simon safe" succeeds and allows her to merge with GOLB into a single entity. The newly-created Betty-GOLB exits Ooo, leaving the Ice Crown behind.

After GOLB "took" Margles, Magic Man traveled to Prismo's Time Room and wished that she would return, but Prismo was unable to successfully bring her back. GOLB's powers make him one of the most, if not the absolute most, powerful entities in the multiverse. Even the magic power of Evergreen's Crown couldn't defeat him. GOLB most likely traps his victims inside of his mouth as mentioned in "Temple of Mars" and attempted in "Puhoy" although Finn managed to bounce off of GOLB's tongue. In "Come Along With Me," GOLB is shown digesting things he eats by returning them to their original form. This is why Betty was able to make a wish with the Crown. GOLB was also shown to release a dangerous gas from his mouth which causes beings to become wraiths infused with discord.

As GOLB is the embodiment of discord, his ultimate weakness is harmony. In "Come Along With Me," GOLB is weakened by the characters singing "Time Adventure"; this suspends GOLB's creations and tears a hole through GOLB, which allows Finn and Simon to escape digestion. 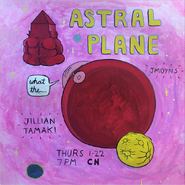 The Promo-Art for the episode “Astral Plane” 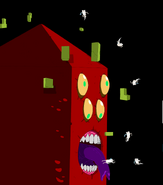 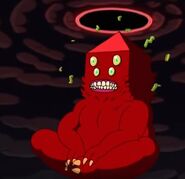 GOLB before fusing with Betty 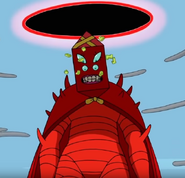 Simon's book, detailing information on GOLB as well as another entity.

The cover of Simon's book, featuring GOLB's mouth and the shapes.