"Frost & Fire" is the thirtieth episode in the fifth season of Adventure Time. It is the one hundred and thirty-fourth episode overall.

A fight between Ice King and Flame Princess causes Finn to have a premonition dream. Finn becomes obsessed with the dream and wants to find out how it ends so he asks Jake for advice. Jake tells him to make Flame Princess and Ice King fight again.

Finn and Flame Princess are hanging out outside of the Tree Fort. Finn hands her a log, which she burns in her arms. Suddenly, the two are interrupted by Ice King, who was flying by overhead. He taunts Flame Princess for hugging a log. Finn groans and feebly reaches at the Ice King. Flame Princess supersedes Finn's attempt to help, and flies toward the Ice King herself, beginning a fight. She punches him in the stomach and sets his underwear on fire before kicking him back into the Ice Kingdom. Her aerobatics produce a fiery heart shape in the sky, and she flies back to Finn, who blushes in his astonishment.

Night falls, and Finn falls asleep in his bed. He starts to dream. Clouds of smoke surround Finn, and he asks "What's cooking? Smells good!" He looks around in confusion and realizes that he is on fire, and begins to scream and panic. However, he soon sees that it is Flame Princess burning him below his stomach. He then realizes it feels good and starts laughing. In the background, a disembodied voice whispers something indecipherable.

Finn awakens to Jake talking to himself as he makes eggs. Finn runs to him, explaining that he had an amazing dream. He tells Jake his dream and mentions that he assumes it was inspired by Flame Princess and Ice King's battle. Jake responds by rambling on about his own elaborate dream. During Jake's narration, Finn begins daydreaming, and decides he must make Ice King and Flame Princess battle again to trigger his dream.

Finn invites Flame Princess out for a picnic in the Ice Kingdom. Whilst sitting, the two the see the Ice King flying home with his groceries, innocently whistling. The Ice King overhears Finn's call and shouts out a friendly greeting. Finn then misleads Flame Princess into thinking that the Ice King was actually making fun of her in the tone of his voice. Flame Princess becomes enraged and confronts the Ice King. Ice King panics and tells her that she can take anything she wants from him. He throws his groceries at her, which hurt her because they are frozen, and she punches him with full force.

Night falls again, and after some bizarre sleeping rituals in the Tree Fort, Finn falls asleep. His second dream begins with the same opening line as his first: "What's cooking? Smells good!" However, this time Finn looks down to discover the Ice King hurling ice cubes at him instead. Finn panics and then sees the Cosmic Owl laughing at him, and recognizes his voice as the incomprehensible whisper from the first dream.

Finn awakens screaming, and hurries downstairs to explain his dream to Jake. Jake freaks out at Finn's mention of the Cosmic Owl, saying that his presence means Finn's dream was prophetic, and that Finn must finish the dream to understand what the Cosmic Owl was saying. Finn rapidly writes an insulting, belligerent letter to Ice King while pretending to be Flame Princess, and another letter to Flame Princess while pretending to be Ice King. Finn delivers the letters, and the two enraged recipients meet in the Ice Kingdom for an epic show-down while Finn spectates from a snow trench.

The fight escalates into a huge explosion, causing the Flame Princess to burn up and enlarge into 'Flame Mode', destroying a large part of the Ice Kingdom in the process. Ice King retaliates by controlling his Ice Mountain like a giant warrior, but is quickly destroyed. The snow then begins to melt, and the Penguins flee. Finn admits to himself that he has gone too far, and collapses in the overwhelming heat, entering his third and final dream.

Finn sits in his bed, and as in his first dream, Flame Princess sets him ablaze. However, this time she completely burns his body, transforming him into a hairy, manly baby repeating the word 'wah'. Flame Princess is startled by this change and walks away. The Cosmic Owl stands before him, and Finn finally makes out what he was saying: "You blew it."

Finn awakens to Flame Princess's destruction of the Ice Kingdom. He runs into the ice cave and rescues Gunter and Ice King. Because Finn is carrying the Ice King on his back, Flame Princess mistakes him for the Ice King, and hurls a flame ball towards them. Ice King freezes the fire blast, saving them.

When Flame Princess realizes her mistake, she shrinks out of ‘Flame Mode' and apologizes. Finn explains that he is the one who is sorry. He explains that he has been manipulating Flame Princess and Ice King into fighting, and admits that he was the one who forged the letters. Flame Princess feels betrayed, especially because the things in Finn mentioned in her letter were so personal to them as a couple. She ignores his apology (just hearing the 'wah' shown in Finn's dream) and tells him that she needs some time alone. As she walks away into the sunset, the Ice King tells Finn, "You blew it, man."

You smell like stink. You're unpleasant, you're not funny, you're old, and no princess will ever marry you ever, simple Simon

You're just the worst. Your hair is bad, your feet smell like face cheeks, your stupid candles smell heinous and you can't even kiss Finn without totes freakin' out!

Let's meet up and fight, dummy.

Finn and Fire Princess hanging out

Flame Princess is insulted by the Ice King

Flame Princess flying towards the Ice King in the first fight

Flame Princess defending against the icicles

A punch in the gut from Flame Princess

Flame Princess creating a heart while fighting the Ice King

Ice King is kicked into the Ice Kingdom

Picnic at the Ice Kingdom

Ice King in the snow

Flame Princess vs. Ice King with Gunther in the final battle

Battle in the Ice Kingdom

Giant explosion at the Ice Kingdom

Finn's buns being burned by Flame Princess in the final dream 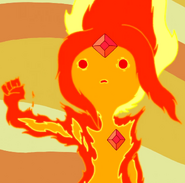 Finn looks over the scene of carnage

Finn preparing to run into the battle

"That letter said things that only you would know, Finn."

"Personal things, Finn, and you used them against me!"

"I thought you were the one person I could…"

"…I need some time alone"