"Frog Seasons: Spring (Again)"
The Crown Frog appears in the episode "The Witch's Garden." Finn and Jake follow him because Finn wants to see him put on his crown. However, he walks into the Witch's Garden through a gate which Finn is too big to fit through. Finn momentarily gets past by having Jake stretch him over the gate's wall, but the frog was never seen again.

He later plays a role in the Frog Seasons shorts, starting with "Frog Seasons: Spring," where Finn and Jake continue to follow him to see what happens when he wears the crown. It is revealed that when somebody else forces the crown on him, he turns into a giant frog monster, and when he puts it on himself, he transforms into Life.

He looks like an ordinary frog, with an aqua color. He also carries a crown with 3 gems: a purple gem in the middle, and 2 blue gems on the sides.

This is what happens when someone forces the crown on his head. 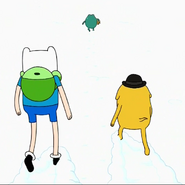 Finn and Jake in the Frog's stomach 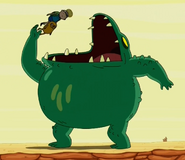 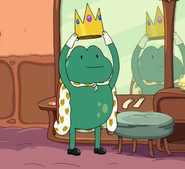 This is what happens when the Frog puts on the crown himself.
Español
Community content is available under CC-BY-SA unless otherwise noted.
Advertisement