"The Prince Who Wanted Everything" (gender-swapped)

A frog with the same appearance made a very brief appearance in "The Monster." It can be seen in the field when Lumpy Space Princess first enters the village and scares its inhabitants.

A frog with different coloring appears as an actor used in one of the movies made in "Video Makers."

A gender-swapped version of the frog is seen in "The Prince Who Wanted Everything".  Lumpy Space Prince falls off a land lump and into the emptiness of Lumpy Space, and falls into the portal.  He exits out of the frog's mouth and enters Aaa.

A frog with the same transportational purpose is seen in the online game, FusionFall. It can be seen in several locations offering warp services between different areas of the world.

Frog looks mostly like a normal frog. He has yellow eyes with dark yellow pupils shaped like plus signs. 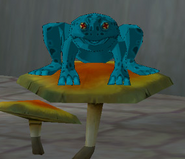 Called a Toadstool in FusionFall

Cameo in "The Monster"