Jasika Nicole
ViViAnn Yee (young)
Frieda is a childhood friend of Kara. After having her ship be destroyed by a controlled Kara, she decided to stay on the island, living an unhappy life. After the end of the Islands Miniseries she and Kara, now calling herself Susan, spent time traveling throughout the islands. In "Come Along With Me", she is shown exploring a new land with Susan.

Frieda is dark skinned, wears a watch, jumpsuit, and a dog hat. She has dark red hair hidden under her cover and pronounced hips.

As a child, Frieda was shown to be a young but curious person, always wanting to see and discover more. As she got older, these feeling seemed to grow, to the point she was finally ready to tell Susan (known as Kara currently), about her goals.

Once she starts to get older, she gives up on exploration due to a controlled Kara destroying her chances of escape. After Susan gets through to her, she is slightly more open, finally seeing the light when Finn inspired everyone at the end of the Islands Miniseries. Now inspired once again, she has the confidence to go exploring, no longer alone. 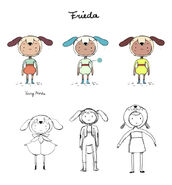