After a magic man turns Finn into a giant foot, he and Jake team up with a band of similar body part freaks to set things right and try to turn themselves back to normal.

Finn and Jake are seen walking, when suddenly they encounter a Mysterious Man, who they think is a hobo. The mysterious man tells them he is starving, and wants food. Finn digs in his backpack and finds a single sugar cube and decides to give it up. Jake warns Finn that giving the man food might be the wrong thing to do, but Finn gives it away anyway, convincing Jake that the man is probably an elf who will reward them. The mysterious man eats the sugar cube and reveals himself as a Magic Man, causing the boys to think that he is a nice guy. Magic Man allows a bird to land on his hand, but uses magic to turn the bird inside out (revealing its organs). This disturbs the boys and causes them to yell at Magic Man asking why he just did that. Magic Man ignores their question, then decides to repay Finn for his generosity by turning him into a giant foot. Finn then freaks out and demands the Magic Man to change him back, but he tells Finn that he has to learn a life lesson first and then disappears into a portal, leaving behind a firework message saying "EAT IT." Finn tries to chase after him, but is unable to move well. Jake likes the transformation and tells Finn that he can fight evil better now, and tries convince Finn to stay in his new body for a little while longer.

Later on Jake sets up a trap for an evil giant by making him step on a button, causing Finn to bounce off a spring and kick the giant in the crotch. Despite Finn's protest, the plan works and Jake runs away carrying Finn. Finn continues to protest saying they need to find the Magic Man, but Jake tries to persuade him to stay a giant foot. He states that "being a giant foot is a gift." They run for a while until they see a burning city. Jake sees this as the perfect job for Finn in his new form. Continuing, Jake states he will help by saving only the babies in the town. Jake then throws Finn, causing him to land in the middle of the burning city filled with Rump People. Finn decides to try stomping on the fires, but his foot body falls over into one of the fires. Finn calls out for help, but The Rump People just get angry at Finn. The gather around Finn stating he is another freak and probably caused the fire. They all carry Finn away from their city and throw him off a bridge. Jake appears moments later, covered in rump people babies, and says he found him because he can sense when Finn is about to cry, claiming it to be a "mother-daughter thing."

While Jake is investigating a bad smell around the bridge, a green thumb with a large eye appears from under the bridge and introduces himself as Gork, the leader of Freak City. He leads Finn and Jake under the bridge and they meet the other innocent people who have encountered the Magic Man: Gorflax, Kim, Trudy, Wee Wee, and Zap. The group tells Finn that they are powerless and just lay around. Jake likes the idea and lies down in a pile of trash where a bunch of Rats come toward him. Finn does not want to just do nothing, but eventually gives in and takes a nap. While sleeping he has a dream of himself, singing in his Auto-tune voice, questioning if he can really get back to his old body and wondering if his hero days are truly over. He then wakes up confident and motivated again. While singing in his Auto-tune voice, he kicks everyone from under the bridge and tells them that they must fight back and try to get their bodies back. He notices that all together, they can make one body to defeat the Magic Man, and Jake volunteers to be the pants.

Magic Man, disguised again as the mysterious man, appears once more asking for food. They all see through his trick, so he takes off his disguise. They battle for a little bit, while Finn tries to figure out the 'life lesson' they were supposed to learn. After managing to pin him down, Finn yells that he should never have given him the sugar cube and that he is just a jerk. Magic Man says they have finally figured out the lesson, turns everyone back to normal, and runs away in a portal. Everyone (besides Finn and Jake) decides to stay together to be strong together. Jake decides that the lesson is to not give your sugar to jerks and Finn subsequently gets angry at Jake, for not trying to help him get his body back. Jake admits to Finn that he has always wanted to be a foot too, but Finn says that he could be a foot anytime he wanted, and that he turned into a foot twice yesterday. The episode then concludes with Jake saying it is complicated, and that Finn will understand when he is older. 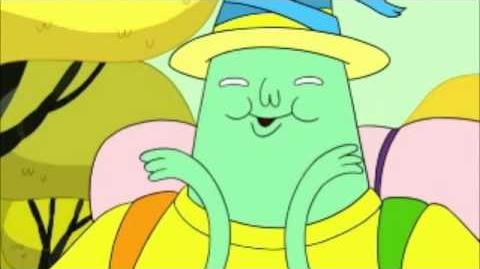 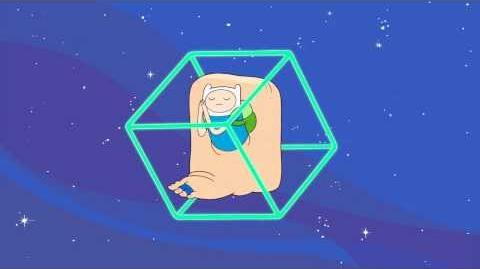 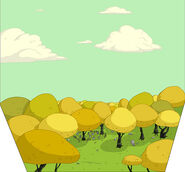 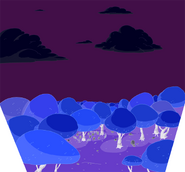 Finn, freaking about his last piece of sugar

The bird is turned inside out by the Magic Man.

Finn is turned into a foot

Finn on the "Monster Crotch Catapult"

Finn kicking a monster in the crotch

Finn trying to save the town

The other freaks gathered together in self-pity and depression

Finn in the "Imagination Zone"

The original freaks decided that they like sticking together