Kent Osborne
Cole Sanchez
Pendleton Ward
Kelly Hogan (during the elementals series)
The Foxes are the main antagonists of the episode "Jake the Dad." After reading through the book, "Baby Eating Fox and the Babies," they thought that their main goal should be to find a baby and eat it. Soon later they found Jake passed out, assuming he was a baby they tried to eat him. Luckily, he was saved by his children, who turned the foxes different colors and zapped them with lightening.

In the episode "King's Ransom," the Foxes were hired by Betty Grof to carry around paper-mâché Ice Crowns, so that the they could diverge Finn, Jake, and the Ice King from being able to locate the real crown, because Betty was experimenting on it.

In the episode "Winter Light," it was revealed that the Foxes had become Ice Elementals, and now played as an orchestra for the Ice Kingdom. 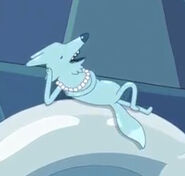