Pendleton Ward
The Forest Wizard first appears in the episode "My Two Favorite People," in which he gives away free power rings to Finn, Lady Rainicorn, and some bears. Jake accidentally scares off the wizard and the bears by becoming big and knocking down some nearby trees.

He reappears in the episode "Storytelling," where he seems to be the leader of the forest, caring for all its inhabitants. When Finn breaks the laws of the forest, the wizard hits him over the head, knocking him out. When Finn comes to, he is in a cage above a magical pit in the earth. The Forest Wizard explains to him that the hole will make him become one with the soil. However, after Finn helps the forest creatures by offering good advice, the wizard lets him go free. When Finn asks how to get out of the cage, the wizard tells him, "Your cage is made of sticks, brother. Just kick it apart." His staff has runic code on it (which translates to "face") during the precise moment when it makes contact with Finn's head in "Storytelling."

He also appears in "Wizard Battle" where he is one of the contestants and appears again in "Reign of Gunters." In the latter episode he is part of the "Wizards Only" club with Bufo and Laser Wizard and attacks Ice King with the others after Ice King stumbles upon their club.

He appears again as part of the Secret Society in "Wizards Only, Fools," planning to help sacrifice Abracadaniel and teleporting away with the rest of the society (sans clothes).

In "Betty," he returns with the Secret Society, seeking to get secrets of the antediluvian schools from the creature Bella Noche, which excites him to the extent he gets restless legs syndrome. However, Bella Noche turns out to be an anti-magic creature that saps the powers of all Ooo's wizards. His powers return after Betty Grof defeats Bella Noche.

His body is very similar to Ice King's; he wears a green robe with two shades darker green leaves printed on it. His hat is the same green and is cone shaped with a dark green maple leaf at the front. He has a long, yellow-green beard and black eyes. His skin is brown. He has a staff with a wooden mask with a long nose on the top of it which has a leaf on it. 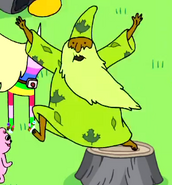 The power rings that he gave to Finn and Lady Rainicorn

Jake scares away the Forest Wizard. 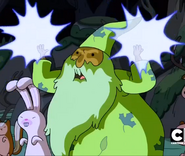