"Football" is the fifth episode in the seventh season of Adventure Time. It's the two hundred and fourth episode overall.[1]

BMO and Football decide upon a deal, but one of them cannot keep up their end of the bargain.[2]

BMO and Football talk to each other via the bathroom mirror. BMO offers Football a deal: they can switch sides of the mirror for just one day. Once Football enters the real world, she runs outside and plays in the grass with a duck she names Carlos (her old friend from college). Then she enters the kitchen where Finn is eating hundreds of grapefruits. She introduces herself to Finn and Jake who decide to play along. When Jake asks her what it is like to live in the mirror she answers: "Cold...empty...it's lonely" and then runs to the bathroom.

Meanwhile, in the mirror world, BMO finds out only part of the world is in the mirror. When he sees Football through the mirror, he greets him. Football says something but BMO cannot make it out so she repeats herself. She tells BMO she is staying in the real world forever. BMO screams, "NOOOOOOOOOO!" as Football leaves. Football goes to the kitchen where Jake is throwing grapefruits at Finn who then slices them with his sword. When Football calls a family meeting, Finn accidentally sends a grapefruit to Jake's head. Shelby and Neptr enter the room and everyone gathers into a circle. Football then tells them BMO is gone forever and starts crying. Neptr bakes a pie which Finn and Jake eat.

Football walks outside and sits down. Jake joins her and gives her a tray with a grapefruit and a spoon. Then he asks her if she's feeling alright. Football holds the spoon in which BMO reflection appears, threatening Football. Football runs away yelling. She hides in the treasure room where BMO appears on a coin on the floor and says: "I'm going to get you, Football!" Football grabs a shillelagh and runs upstairs. BMO appears as a reflection on every object in the kitchen in the kitchen and Football smashes everything. Neptr enters the kitchen. Football sees her reflection in Neptr so she smashes him. Finn enters the room with a spoon and Football smashes it away. She runs in the bathroom and breaks the mirror. Finn grabs her and the shillelagh and Jake cleans up the mess. They then force her to wear a traffic cone on her head and go in the corner next to a window where BMO appears. BMO tells her she will go to the dirt hole if they do not switch places.

Football decides to go onto the only place where there are no reflections, so she is safe - the roof. Finn and Jake follow her and try to console her. Giant BMO reflection appears on the chimney which causes Football to fall off the roof and into the pond. When she falls into the pond, BMO and Football switch places. Football finds the beautiful night sky reflection in the pond a nice place to live. BMO forgives her and promises to visit. BMO gets out of the pond and Finn and Jake ask if he is alright, Jake then tells him to wear the traffic cone. BMO yells that he loves the traffic cone. 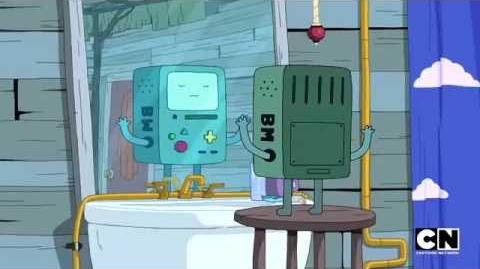