"Ghost Fly"
Flies are a species in insect commonly found in the real world. In the Adventure Time series, many flies can be seen, especially to indicate foul smell or sweat.

Fly that almost was eaten by Jake

A fly that landed on Normal Man, but was then swatted away. 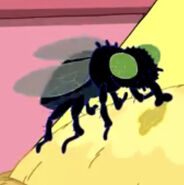