Hannibal Buress
Flame Prince is the gender-swapped version of Flame Princess. He was created by Natasha Allegri in her artwork. He makes his debut in the show as a cameo in the episode "The Prince Who Wanted Everything."

He has fire-like hair[1] styled up and a big red jewel on his forehead. He also has yellow skin and pointed ears. He wears an orange and red suit and matching boots, each with a red jewel on it. However, in "The Prince Who Wanted Everything", his boots were brown instead of orange.

In the episode Five Short Tables, Fionna saw Flame Prince in the library and awkwardly tried to hide from him, implying that they must have had a relationship in the past that ended in a bad breakup, the same way Finn and Flame Princess did. So, basically their relationship is the same as that of their genderswaps.

Cake apparently has some sort of hatred for Flame Prince, as she was seen angrily calling him a "Walking fire hazard" in the episode "Five Short Tables".

Flame Prince and Turtle Prince are good friends with each other. In the episode Five Short Tables, Flame Prince was seen having a conversation with Turtle Prince, which was very awkward for the both of them, as he kept on blushing and doing awkward things. Turtle Prince ambitiously suggested that he reads a book to Flame Prince, to which he nervously declined, saying that he only came to use the bathroom, which they both laughed shyly about.

Flame Prince was first introduced in the Adventure Time with Fionna and Cake comic mini-series. Here, it is revealed that he is a feral child who lives with a Fire Lion pride. When the Ice Queen kidnaps the babies of the pride, Flame Prince goes after her, only to be defeated and have a heated salt crystal inserted into him that eats away at his body heat. After being rescued by Fionna and Cake, he ended up getting reduced to a small flame ball-like creature. 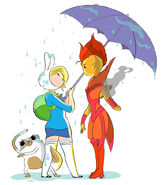 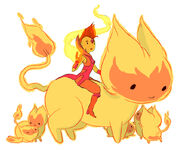 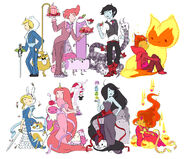