Flambo's Inferno  is an expansion of the Cartoon Network game Flambo's Hot Mess. The game includes new levels, hazards, and puzzles as well as a level builder and a shop. In the game, you play as Flambo while collecting pieces of coal that Magic Man has scattered. You must collect all the coal and get to the end of each level. You earn a diamond after collecting all the coal on each level. You can then spend the diamonds in the shop.

Flame Princess left some coal out for Flambo, but Magic Man spread them all over. Flambo now must grab as much coal as he can and escape before the whole place burns down!

The gameplay is very similar to that of Flambo's Hot Mess. Flambo is on a metal and wooden dock. The metal sections are fireproof, but the wooden sections will burn when Flambo touches them. The Critters (Bomb-Berries, Bounce-Berries, Fire Spreader Bugs, and Firework Hats) and vines from Flambo's Hot Mess reappear in this game, as well as a Rocket Critter (launches, and then sets whatever it hits on fire), a Water Ballon Critter (puts out fires), a less powerful Purple Bomb-Berry, fans, and buttons that open doors and starts fans. Each level is a puzzle, and you must figure out what objects to burn and which to avoid.

The level builder allows you to create a level however you want, as long as there is a start, a finish, and some coal. Themed backgrounds, critters, and tiles can be bought at the shop. You can make a Candy Kingdom, Fire Kingdom, or Lumpy Space themed level. 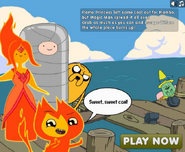 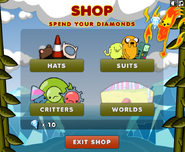